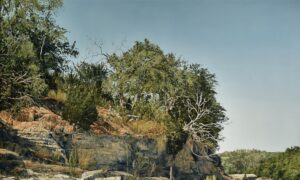 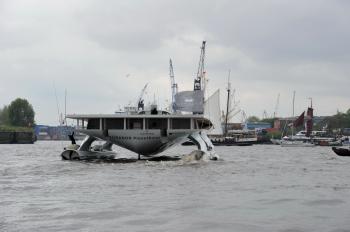 LARGEST SOLAR POWERED SHIP: PlanetSolar is a 102-foot catamaran designed to sail around the world with solar power. (Courtesy of PlanetSolar)
News

The world’s largest solar powered ship made its first public appearance at the Hamburg port festival in Germany May 7–9.

The catamaran, christened PlanetSolar, is almost 102 feet (31 meters) in length and designed to sail around the world using sunlight alone. It was a star attraction at the festival.

PlanetSolar was built in Kiel, Germany, and weighs about 94 tons (85 tonnes). Its top speed is 14 knots (about 16 miles per hour), and it has a respectable cruising speed of 7.5 knots.

The ship is covered with about 5,700 square feet (536 square meters) of photovoltaic solar panels. Using energy stored in batteries, the ship can sail at cruising speed for three days without sun.

PlanetSolar will depart from the South of France in April 2011 and will stop at New York, San Francisco, Darwin in Australia, Singapore, and Abu Dhabi before returning to France 160 days later.

A crew of three or four will man PlanetSolar on its ocean crossings, but the boat will have up to 40 people onboard during the promotional trips planned for each stopover. The crew includes Frenchman Gérard d’Aboville, who is famous for rowing alone across the Atlantic and the Pacific.

The 31,000-mile (50,000 km) route will take PlanetSolar across the Atlantic Ocean, through the Panama Canal, across the Pacific and Indian oceans, over the Red Sea, and through the Suez Canal. Organizers are considering changing the last stage of the voyage as they fear Somali pirates might hijack the ship. Instead of going through the Red Sea, the ship could go around Africa, past the Cape of Good Hope. This would take it far from the equator and its vital sunlight.

The project is the idea of Swiss paramedic, pilot, and engineer Raphaël Domjan, who will be captain. He has obtained the backing of various companies, institutions, and personalities. They include a Swiss watch company, a solar power company, the Swiss government, the great-grandson of writer Jules Vernes, sailing record-holder Jean-Luc Van Den Heede, and famous diver Albert Falco.

“During our round-the-world tour, we will have to manage whatever energy nature gives us,“ said Raphaël Domjan in a press release. “We will have to constantly optimize our route and speed in line with the available sunshine and the medium-range weather forecast. No one has ever undertaken such a task.“

Unless it capsizes, sinks, runs aground, turns back, or breaks down, PlanetSolar will set several world records. This will be the first ever round-the-world voyage, the first Indian Ocean crossing, and the first Red Sea crossing by a solar powered boat.