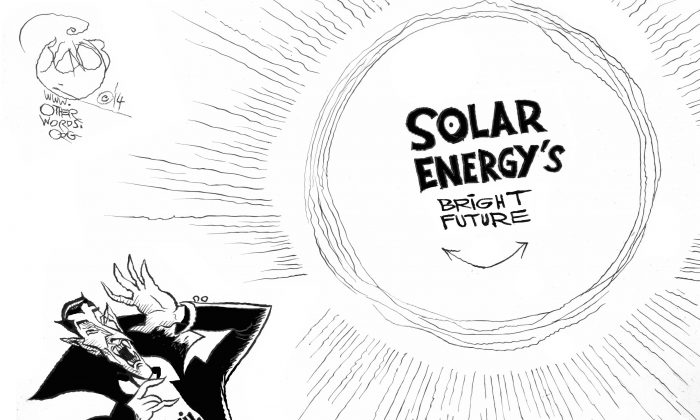 With so many homeowners and businesses making greener energy choices, private utilities—along with big oil, gas, coal, and nuclear companies—see the writing on the wall.

Unlike some other denizens of the fossil-fueled set, this gang isn’t beating oil wells into solar panels, retiring nuclear reactors, or embracing wind and geothermal power. Instead, these guys are trying to coax lawmakers into rigging the rules against increasingly competitive new energy alternatives.

You see, the bulwarks of conventional energy are good at math. And the math is increasingly not in their favor.

Solar panels are growing so affordable, accessible, and popular that sun-powered energy accounted for 74 percent of the nation’s new electric generation capacity in the first three months of this year. Wind power comprised another 20 percent, geothermal 1 percent, and natural gas plus other sources accounted for the final 5 percent.

OK, so that first-quarter surge was kind of an anomaly because it included the inauguration of the Ivanpah Solar Electric Generating System, the world’s largest solar-concentrating power plant. Through a vast array of 7-foot-by-10-foot mirrors located on federal land along the California–Nevada border, this remarkable site produces enough energy to power 140,000 homes. Another vast utility-scale project aptly called Genesis Solar ramped up too.

But the U.S. solar industry did install a record amount of new capacity in 2013. And once enough folks produce their own power on their rooftops and utility-scale clean energy becomes commonplace, demand for the juice generated by the dangerous and dirty oil, coal, gas, and nuclear industries will fizzle.

Can you imagine the economy weaning itself off of fossil fuels by the middle of this century? That’s what Denmark has officially pledged to do.

Besides, we all need to visualize this possibility. Unless most of humanity transitions to a new way of life powered by climate solutions, global warming could ultimately render the Earth uninhabitable.

Can you guess who is trying to manipulate legislation to squeeze a few more years out of the dirty-energy status quo instead of helping make a requisite green transition happen?

What are these bills calling for? In states like Arizona, Utah, and Oklahoma, there are efforts to essentially tax homeowners who lease solar panels. But mostly ALEC is aiming for something bigger: gutting individual state “renewable portfolio standards.”

Those wonky-sounding regulations require utilities to provide a certain percentage of power from renewable sources at some set point in the future.

Alternative-energy leader California, for example, has committed to drawing a third of its juice from climate-friendly sources by 2020.

And who’s paying for this dirty work?

Edison Electric Institute (EEI), the trade association for the 70 percent of the U.S. utility industry controlled by private companies, is behind it—according to the Center for Media and Democracy. It’s joined in this legislative attack by coal giant Peabody Energy, ExxonMobil, Shell, BP, Koch Industries and other big fossil-fueled interests.

It may be hard to believe, but so far, foes of systematically encouraging renewable energy growth are losing. Badly. Even in Kansas. That state’s GOP-controlled Legislature refused to repeal its renewable energy standard a few months ago in a 63–60 vote.

All 13 state-targeted efforts to chip away at or kill renewable energy standards have failed so far this year. Not one state rolled back its standards in 2013 either.

Who could have guessed that renewable energy would be so hard to foil? Well, anyone who pays attention to all the jobs it generates.

The solar industry now employs at least 142,000 people in the United States. Solar workers outnumber coal miners in this country. In Texas, solar supports more jobs than ranching and California has more solar workers than actors. Wind jobs are growing fast too. They hit a total of 80,000 last year.

Emily Schwartz Greco is the managing editor of OtherWords, a non-profit national editorial service run by the Institute for Policy Studies. William A. Collins is a columnist at OtherWords, former state representative, and former mayor of Norwalk, Conn. This article was originally published at OtherWords.