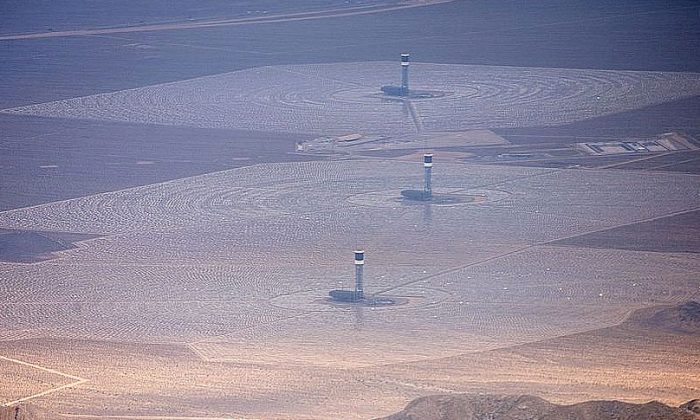 Every day, along I-15 near Las Vegas, dozens of birds fly into concentrated beams of sunlight and are totally incinerated.

At the 390-megawatt Ivanpah Solar Plant, 6,000 birds per year are utterly destroyed, leaving behind only white smoke, according to the Los Angeles Times. The issue began in 2014 when the plant opened.

“We’re doing everything we can to reduce the number of birds killed out here,” the plant’s spokesman, David Knox, told the Los Angeles Times. “If there’s a silver bullet out there, maybe we’ll find it.”

Workers at the plant, seemingly acknowledging how commonplace the bird deaths are, call them “streamers,” as they leave wisps of smoke as they burn in the sky.

The plant uses giant mirrors over 5 square miles to focus beams of sunlight into massive towers. The sunlight can be used to power up turbines inside, generating energy for the power grid.

Officials have said they’re trying to come up with a solution, but their progress has remained “modest” at best, the Times noted.

“Ivanpah is a bird sink—and [a] cautionary tale unfolding on public lands,” Garry George with the Audubon California conservation group told the newspaper. “It continues to operate as though there’s an endless supply of birds to burn.”

Meanwhile, coyotes have been eating roadrunner birds that get trapped along the plant’s fences designed to keep desert tortoises out of the plant. The firm plans to cut holes in the fences to allow roadrunners to escape.

“It may take another nine months of data to determine what is actually going on at Ivanpah in terms of bird mortalities and the effectiveness of various deterrents,” Amedee Bricky, with the Fish and Wildlife Service’s migratory bird program, told the Times. “Eventually, we hope to transport what we learn to nations around the world developing their own solar energy programs.”

The facility—a joint-venture between NRG Energy, Google and BrightSource Energy—cost $2.2 billion to build. It was subsidized with an Obama administration $1.6 billion loan guarantee.