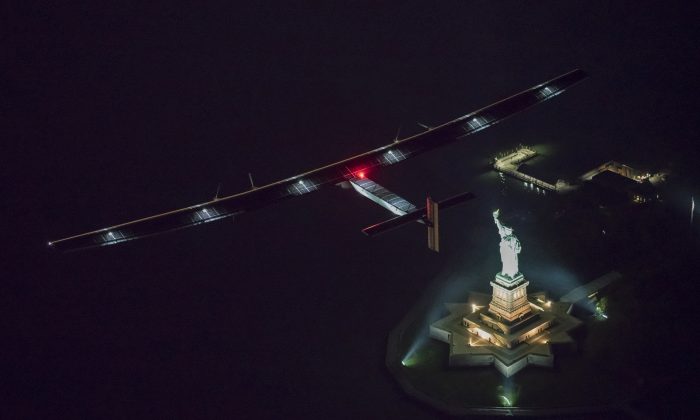 Solar Plane Makes Statue of Liberty Fly Over, Then Lands in New York

NEW YORK—After crossing Asia, the Pacific Ocean, and America, Solar Impulse 2 arrived in New York at 4 a.m. on Saturday, June 11. The solar powered aircraft that uses no fuel flew over the Statue of Liberty before landing at JFK International Airport.

The aircraft took off from Lehigh Valley, Pennsylvania at midnight. And after a short flight, entered the bay over the Verrazano Bridge at an altitude of 1500 feet from 2:00 am to 3:15 am EDT.

The flight is part of an attempt to achieve the first ever round-the-world solar flight with a goal to demonstrate the power of clean technologies.

Swiss innovators and pilots Bertrand Piccard and Andre Borschberg launched the Solar Impulse project in 2003 and started building the revolutionary aircraft. After 12 years of research and development, they initiated their journey in 2015 to show it is possible to save our planet by using clean energy.

The plane is not being used for commercial purposes or to carry passengers. It was built to convey a message.

“The problem with our society is that, despite all the grand talk about sustainable development, we are a long way from making use of the clean technologies that are already available to us. Those solutions bring opportunities to create jobs, make profit, sustain the growth of the industry, and at the same time protect the environment,” said Bertrand Piccard on the group’s website.

It is not the first solar airplane, but it is the first to fly day and night only using energy stored during day flights in its batteries. This allows the plane to cross oceans and complete a tour around the world.

The aircraft began its journey around the globe in March 2015 in Abu Dhabi, United Arab Emirates. It landed in Hawaii on July 3, five days after its departure from Japan—having set a record, at 4,000 miles, for the longest distance traveled by a solar-powered aircraft without stopping. However, that flight took a toll on the aircraft and its batteries overheated during the flight.

Due to time needed for extensive repair of the batteries and the changing seasons, the pilots had to postpone their next attempt this spring. The plane took off again from Hawaii in April 2016 and landed in San Francisco after flying 62 hours.

Solar Impulse 2 has traveled from San Francisco to Phoenix, Phoenix to Tulsa, Tulsa to Dayton, and Dayton to Allentown, Lehigh Valley.

After New York City, it will continue its journey across the Atlantic before reaching Abu Dhabi where the adventure started in March 2015.

The Solar Impulse 2 is doing its around-the-world flight in a total of 10 stages with a total travel distance of about 22,000 miles. The cruising speed is between 28 mph and 56 mph, depending on the altitude. And the aircraft has over 17,000 solar cells.

Borschberg, 64, is the CEO of Solar Impulse. He is an engineer by education and a graduate of the Massachusetts Institute of Technology (MIT) in management science. He is experienced in creating and managing companies, as well as in flying.

He first joined McKinsey as a consultant for five years, before starting his own entrepreneurial activities. His passion for aviation and his interest in innovative solutions led him to team up with Piccard to found Solar Impulse—and be one of the pilots.

Piccard, 58, is the chairman. He studied medicine, completing a double major in psychiatry and psychotherapy. He specialized in therapy under hypnosis and became a teacher and supervisor at the Swiss Medical Hypnosis Society.

An enthusiastic aviator, he also obtained licenses to fly balloons, airplanes, gliders, and motor-gliders. He made the first ever non-stop around-the-world balloon flight. As a balloon pilot, he used his hypnosis skills during the first transatlantic balloon race, which he won in 1992.

The pilots both use yoga techniques including meditation to face the physical, psychological, emotional and spiritual challenges during the flights. The meditation also allows them to address the difficulties of warming the body with little available oxygen and cooling the body in the heat of the sun.