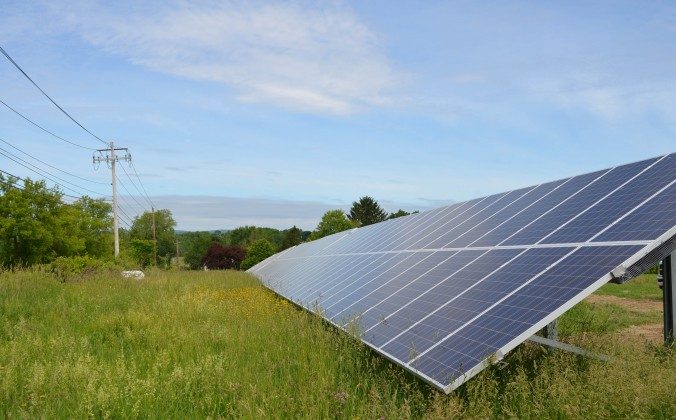 Solar panels at 5 Spoke Creamery in Goshen on June 3, 2015. (Yvonne Marcotte/Epochtimes)
US

Solar energy is one of the cleaner sources of renewable energy, and scientists around the world are rapidly discovering new solar technologies that will improve solar photovoltaic (light converted into electricity) performance and efficiency. From liquid coatings to fewer materials, some of the goals are to make solar energy cheaper, more convenient, more efficient, and easier to maintain.

One problem scientists study is the amount of power that solar panels can emit, which depends on how much light strikes the module (a number of solar cells connected to each other). Joshua Pearce, who is a science and engineering professor at Michigan Technological University, and a team from Queen’s University in Canada have found a new solution to low energy output.

In works published in the Institute of Electrical and Electronics Engineers (IEEE) Journal of Photovoltaics, the team reports that by simply placing reflectors on the ground between solar panels, sunlight can be bounced back onto the panel and increase energy capacity.

This specifically addresses commercial and utility scale photovoltaic (PV) installations, which are typically arranged flat and spaced apart to prevent shading. Although they are aligned in multiple rows for maximum sun intensity, the spaces in between also absorb the light.

The team calculated the effect of the bounced light through a method called bi-directional reflectance function (BDRF). BDRF is mathematical equations that describe how light bounces off irregular surfaces and predicts how the light will scatter. It is commonly used for movies and video games to create more lifelike computer-generated imagery (CGI) characters and scenes.

Similarly, the team created a BDRF model that could predict how much sunlight would bounce off a reflector and where it would shine on the array. The result is a 45 percent improved energy yield in traditional outdoor flat glass panels installed in large-scale utility solar farms. With panels optimally tilted, the efficiency increased by 18 percent and simulations show it could be pushed to 30 percent with better reflectors.

The way reflectors are currently used, if they’re used at all, causes temperature swings and non-uniform illumination, which is bad for the panels and actually voids warranties for solar farm operators. Pearce explains in a Michigan Tech report that by using the BDRF method, the team is able to take the risk out of using reflectors, while also increasing efficiency.

“The main goal here was to hand the solar farm developers the data needed on a silver platter, which they can then use to modify their farms and crank up their output and revenue by about a third,” Pearce said.