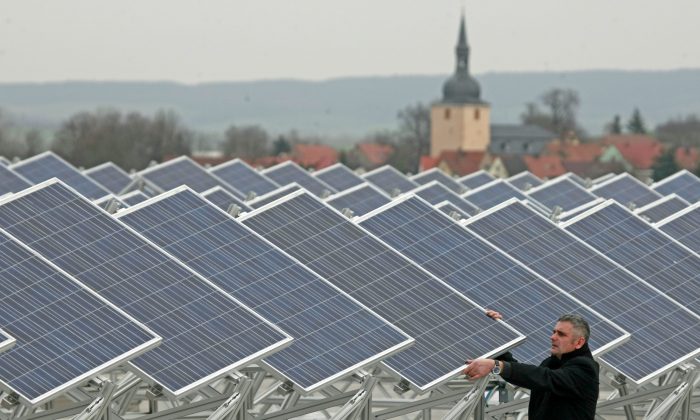 FILE - In this Nov. 19, 2008 file photo Roberto Chudzinski checks solar modules on the roof of the Soemtron AG in Soemmerda, Germany. After concluding that global warming is almost certainly man-made and poses a grave threat to humanity, the U.N.-sponsored expert panel on climate change is moving on to the next phase: what to do about it. The Intergovernmental Panel on Climate Change, or IPCC, will meet next week in Berlin to chart ways in which the world can curb the greenhouse gas emissions that scientists say are overheating the planet. (AP Photo/Jens Meyer, File)
Social Media

An article saying that “solar panels drain the Sun’s energy” is a hoax.

The report was published on self-described satirical website National Report.

“This week, a scientific research facility in Wyoming made a startling discovery that is certain to change the way millions of Americans look at the environmentalism movement, after they found conclusive evidence that solar panels not only convert the sun’s energy into usable energy, but that they are also draining the sun of its own energy, possibly with catastrophic consequences far worse than global warming,” the fake report says.

According to a disclaimer that has since been removed, the publication doesn’t have real news.

It says: “DISCLAIMER: National Report is a news and political satire web publication, which may or may not use real names, often in semi-real or mostly fictitious ways. All news articles contained within National Report are fiction, and presumably fake news. Any resemblance to the truth is purely coincidental … Advice given is NOT to be construed as professional. If you are in need of professional help (and you may be if you are on this page), please consult a professional. National Report is intended for a mature audience and not for children under the age of 18.”

The “solar panels” article had a few thousand “likes” and shares on Facebook.