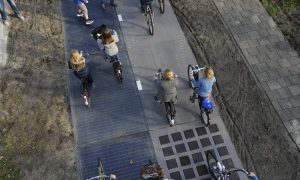 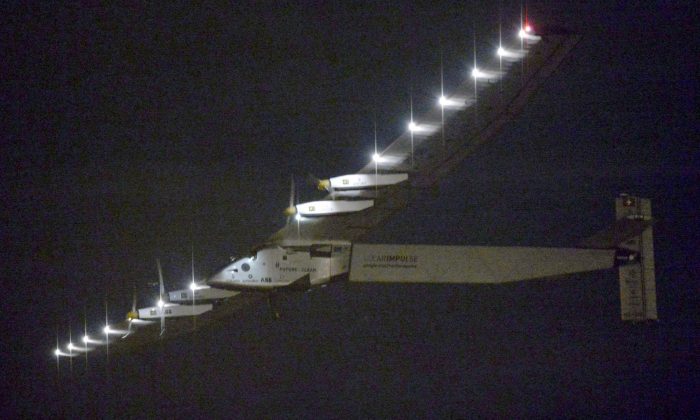 TOKYO—A solar-powered plane took off from Japan early Monday to attempt a five-day flight over open water to Hawaii, the eighth leg of its bid to fly around the world without fuel.

Its long wings lighting up the night sky, the Solar Impulse 2 departed at 3:03 a.m. after an unscheduled, month-long stop in Japan because of unfavorable weather.

The flight to Hawaii, by far the longest of the journey so far, is risky because there are few if any places to land in an emergency.

Swiss pilot Andre Borschberg is flying solo. The plane, which started in Abu Dhabi on March 9, is powered by more than 17,000 solar cells on its wings that recharge its batteries. From Hawaii, it is to continue on to Phoenix, then hopscotch across the United States and the Atlantic to Europe, before returning to Abu Dhabi.

Borschberg originally left Nanjing, China, for Hawaii on May 31, but diverted to an airport in Nagoya in central Japan on June 1 because a cold front threatened to block his way. After a wing repair, he and team members waited in Nagoya for the right conditions to depart.

The project is meant to demonstrate the potential of improved energy efficiency and clean power, though solar-powered air travel is not yet commercially practical.

Solar Impulse 2 is dependent on the right weather conditions, and organizers waited about nine hours after takeoff for the plane to pass what they called “the point of no return” before officially announcing that it was aloft.

“Now fully into the flight to Hawaii,” Borschberg tweeted a little while later. “Very strong emotions as I passed the point of no return: exploration starts here.”