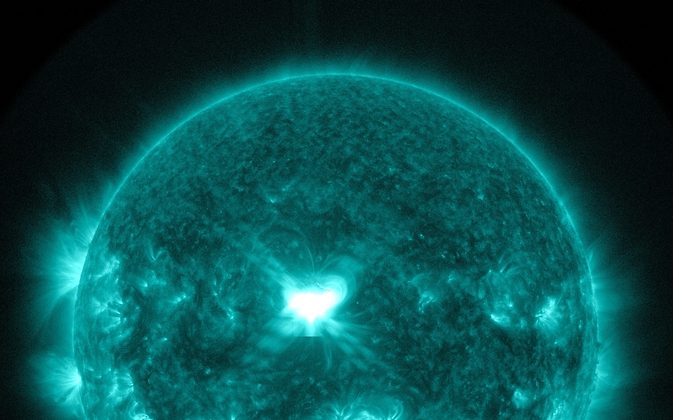 An intense burst of radiation was emitted from the sun this week and is headed toward Earth.

NASA reported that the “significant solar flare,” which peaked at 1:48 p.m. EDT on Wednesday, is headed toward Earth. The flare was an X1.6 class, with X-class denoting the most intense flares while the number providers more information about its strenth.

“An X2 is twice as intense as an X1, an X3 is three times as intense, etc,” the space agency notes.

The Space Weather Prediction Center says that geomagnetic storms may hit the Earth sometime between September 12 and September 14.

One impact of such storms is aurora borealis, or the northern lights. Another is disruptions to Earth’s power grid and satellites. Specific impacts include power system voltage irregularities, problems with GPS systems, and false alarms triggered on some alarm systems.

An X1.6 class solar flare flashes in the middle of the sun on Sept. 10, 2014. This image was captured by NASA’s Solar Dynamics Observatory and shows light in the 131 Angstrom wavelength, which is typically colorized in teal. (NASA/SDO)

The storm is already causing radio interference, the National Oceanic and Atmospheric Administration said in an alert.

“G2-G3 geomagnetic storms can cause some problems for the (power) grid but are typically very manageable,” Murtagh said in an e-mail Thursday morning. “We may also see some anomalies with satellites so satellite operators around the world have been notified. And problems with the accuracy of GPS have been observed with this level of storming.”

The Geophysical Institute says that northern lights should be visible in most of Alaska early Friday morning.