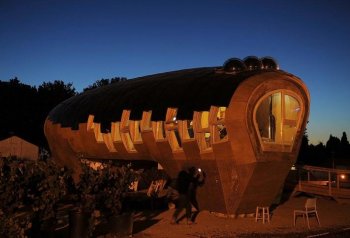 GOING SOLAR: The solar powered FabLab House by the Instituto de Arquitectura Avanzada de Catalunya is seen at night on June 22, in Madrid, Spain. Seventeen universities from around the world are competing with their carbon-free solar powered houses in the (Denis Doyle/Getty Images)
News

Anastasia Gubin
View profile
Follow
biggersmaller
Print
To prove the practicality of their designs, teams from 17 universities in the United States, Europe, and Asia, are living in their fully equipped houses during the 10-day Solar Decathlon Europe competition, in Madrid.

The competition ends June 27, but students from the Arts et Métiers Technical University in Paris have already won the sustainability contest with their house, Nápévomó, (“Do you feel well?” in the Cheyenne language).

Nápévomó had the lowest “negative environmental impact during its life cycle,” and its builders showed “skill and environmental sensitivity” in constructing it, according to the Solar Decathlon website.

The competitors have to pass 10 (hence decathlon) different tests including design, construction, and energy efficiency. Most importantly, they have to show that they can cook, eat, wash dishes, do laundry, and live a normal life inside their homes.

The houses are required to have the regular amenities, including air conditioning and heat, and must be constructed with easily accessible materials.

Visitors are allowed to enter the houses and participate in conferences and workshops on topics such as recycling, energy saving, and energy efficiency.

The main objectives of the competition are to raise awareness about responsible energy use, and the efficiency and availability of renewable energy technologies.

"The initiative of this competition is fully in line with the goals and priorities set both by the European Union and by the government of Spain regarding the promotion of and firm commitment to promoting sustainable development and renewable energies," said Spanish Minister of Housing Beatriz Corredor on the website.

The biannual Solar Decathlon competition began in 2003 in the United States. In 2007, the Spanish Housing Ministry and the U.S. Department of Energy signed an agreement to create a European version of the competition, in collaboration with the Polytechnic University of Madrid.

To learn more visit the solar decathlon website at www.solardecathlon.gov/