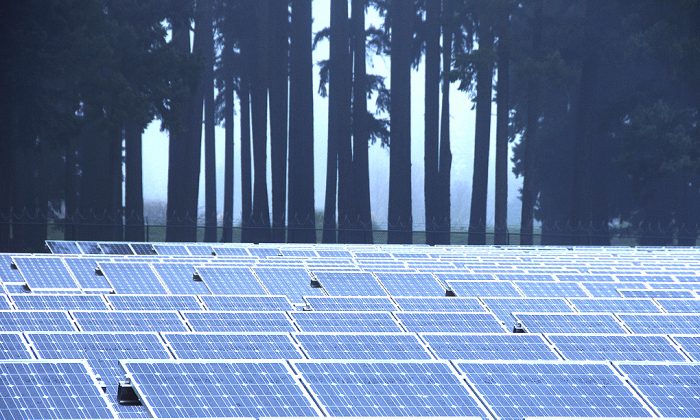 Solar panels stand in front of rows of trees at the Baldock Solar Highway project site on on Dec. 5, 2011. (Oregon Department of Transportation/Flickr, CC BY)
Environment

Except for nuclear and geothermal, all energy we use comes from the sun in one form or another. As sunlight reaches the Earth’s surface, it powers heat transfers that move air and ocean currents, used for wind and tidal power. The sun evaporates water, contributing to the hydrologic cycle that fills reservoirs for hydroelectricity.

Even fossil fuels—coal, oil, and gas—are forms of solar energy, created when, hundreds of millions of years ago, plants absorbed and converted sunlight through photosynthesis, then retained that energy when they died, decayed, and became compacted and buried deep in the Earth, along with the animals that ate them. Wood, peat, dung, and other plant-based fuels are a less concentrated form.

Most people think of solar energy in its direct form, harnessed in a variety of ways from the sun’s rays as they hit Earth. Technologies range from windows and water tanks placed strategically to make use of the sun’s energy, to photovoltaic cells (or solar panels), to large mirrors that concentrate solar heat to boil water and drive turbines.

When Will Rooftop Solar Be Cheaper Than the Grid? Here’s a Map

Unlike fossil fuels, or uranium-dependent nuclear power, the energy source is free, inexhaustible, and non-polluting, with no troublesome byproducts like radioisotopes or carbon dioxide. It can be used for a variety of applications, from providing power for a single streetlight to generating electricity for a home to keeping satellites and factories going.

Solar also has disadvantages. Without energy-storage systems, it only works when the sun shines, and it can be costly. Solar installations to provide power for large areas can take up a lot of space, and some technologies rely on rare materials that must be mined, with environmental consequences.

Because of rapid technological advances, falling prices and the many advantages of solar power, it’s become one of the fastest-growing sources of renewable energy worldwide, with installed capacity growing on average 43 percent a year since 2000, according to the World Economic Forum. Still, as an MIT reports points out, solar was only generating about 1 percent of global electricity in 2015. With costs dropping by about 10 percent a year, and technologies for harnessing and storing the sun’s energy improving, that could climb to 20 percent by 2027, an Oxford University study found.

Utilities, Solar Energy and the Fight for Your Roof

About 90 percent of currently installed solar capacity uses crystalline silicon wafer-based photovoltaic cells. As Phys.org notes, they’re non-toxic, abundant and reliable, but the wafers are thick and rigid and somewhat expensive to manufacture. Many newer-technology cells are smaller, less rigid, and often more affordable, but they can come with other problems. Some use materials that “involve rare and/or toxic metals.”

The website notes that promising “third generation” developments include “thin-film solar photovoltaic employing dye-sensitized, organic, quantum dot or perovskite solar cells, and novel combinations of semiconductor materials, as well as concentrators.” Technology is also being developed to mimic photosynthesis, converting sunlight to electrons with nanotechnology and light-absorbing compounds and delivering the electrical energy “to customized catalysts that convert water and CO2 into oxygen and chemical fuels.” Artificial photosynthesis is also being studied as a way to capture and convert CO2 emissions to generate fuels, plastics, drugs, and other products!

Solar cell placement raises interesting possibilities as well, including paving roads, parking lots and bike lanes with durable panels that not only generate power but also melt ice and snow. Some experts predict solar technology could make the need for baseload power and even transmission grids obsolete. As Steve Holliday, CEO of National Grid, which operates gas and power transmission networks in the U.K. and northeastern U.S., said, “From a consumer’s point of view, baseload is what I am producing myself. The solar on my rooftop, my heat pump—that’s the baseload.”

Solar is viable and affordable enough (especially with tax credits in jurisdictions including the U.S.) that it can be easily installed on rooftops to generate electricity for homes, public institutions, and businesses. It’s becoming an increasingly important part of the energy mix, especially as transmission-grid and storage-system technologies become more sophisticated and efficient.

Every hour, the sun bathes the Earth with enough energy to supply our needs for more than a year. There’s no reason we can’t harness more of it to cut back on polluting, climate-altering fossil fuels.