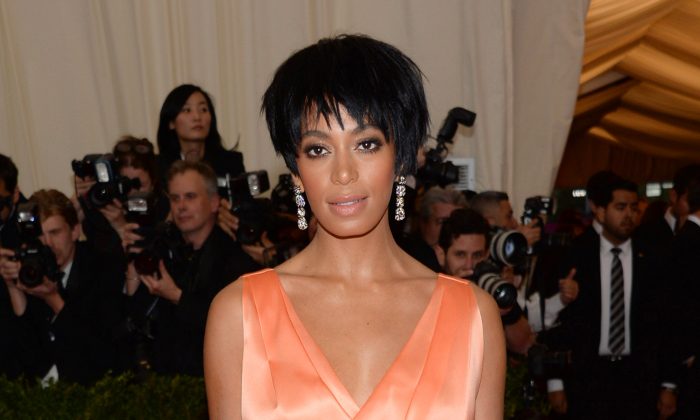 FILE - This May 5, 2014 file photo shows Solange Knowles, sister of Beyonce Knowles, at The Metropolitan Museum of Art's Costume Institute benefit gala celebrating "Charles James: Beyond Fashion" in New York. Beyonce, Jay Z and Solange say they have worked through and are moving on since a video leaked this week of Solange attacking Jay Z in an elevator inside the Standard Hotel after the May 5, gala. (Photo by Evan Agostini/Invision/AP)
Entertainment

Solange Knowles’ digital music sales jumped up by 233 percent following an incident between her and her brother-in-law, Jay Z.

Knowles’ track sales increased on the week ending May 18, according to Nielsen SoundScan data that was obtained by HipHoxDX.

The increase in sales was likely due to video footage that was released of her allegedly attacking Jay Z in an elevator, which wen viral. TMZ released the video May 12.

Beyonce–her sister–Jay Z, and Solange released a joint statement about the matter.

“As a result of the public release of the elevator security footage from Monday, May 5th, there has been a great deal of speculation about what triggered the unfortunate incident. But the most important thing is that our family has worked through it,” the statement says, according to The Associated Press. “Jay and Solange each assume their share of responsibility for what has occurred. They both acknowledge their role in this private matter that has played out in the public. They both have apologized to each other and we have moved forward as a united family.”

The New York Daily News, citing insider sources, said that Solange was drunk and belligerent during the incident.

However, the statement said that it’s not true.

“The reports of Solange being intoxicated or displaying erratic behavior throughout that evening are simply false. At the end of the day families have problems and we’re no different. We love each other and above all we are family. We’ve put this behind us and hope everyone else will do the same.”

Later, the Standard Hotel–where the elevator was located–fired the employee who leaked the video. It said they are “pursuing all available civil and criminal remedies,” the Daily News reported.