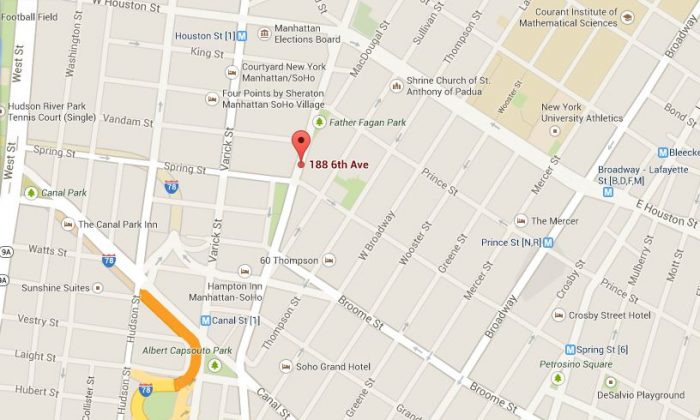 188 6th Avenue, where a building is potentially unstable and has been evacuated. (Google Maps)
Crime and Incidents

A building in New York City’s SoHo neighborhood was shaking on Thursday, prompting an evacuation.

The building, 188 6th Avenue, or 188 Avenue of the Americas, was evacuated after residents said it was shaking.

The Fire Department of New York said via Twitter that the building “shifted.”

The department is awaiting an assessment from the Department of Buildings.

There is construction next door to the building, which may be a factor.

Marsha, who lives on the sixth floor and is a rent-stabilized tenant, said that she has lived in the building for 35 years.

“I have just tried to be as calm as possible, because I am tired of being agitated by all this,” she said. “I am happy that construction has stopped and the building isn’t shaking anymore.”

“If I have to vacate I don’t know what I will do,” she added.

Micki McGee, who has been representing residents in six to eight buildings surrounding the “lot line” adjacent to the development, and set up this website, said that “there are hairline cracks in the building.”

Officials are deciding whether the building is safe to enter, McGee said.

Multiple complaints have been lodged with the Department of Buildings about the building shaking, going back to 2008. The one today was reported at 3:57 p.m. The previous one came on May 28; the building was inspected the next day.

The fire department said earlier that “multiple dwelling[s] shifted” and that the situation is “under control.”

Officials declined to comment for the time being. As of 7:33 p.m. the building was still being assessed.

Deborah Glick, a Manhattan Assemblywoman, responded to the situation via Twitter.

“Another building compromised by construction next door. It feels like that happens every month. Can someone ask Mayor B- what’s the deal?”

188 6th Avenue, a six story building, was built in 1900 and has 21 apartment units, according to online records.

Local resident John McCartney said via Twitter that there’s a helicopter flying around the building.

The MTA, the regional transportation provider, said on its website: “Due to street level FDNY activity on 6 Av,

train service running with delays between Spring St and W 4 St- Washington Sq, in both directions.”

[View the story “Building ‘Shifted’ in SoHo, Evacuated” on Storify]