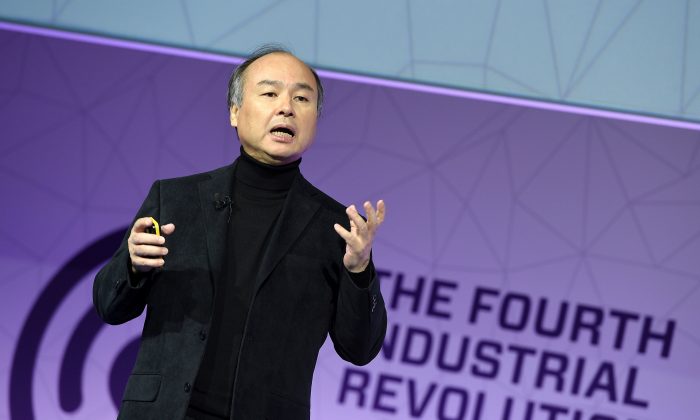 Masayoshi Son, the larger-than-life billionaire and chief executive of Japanese conglomerate SoftBank, doesn’t do anything small.

When Son announced in May that he’s raising $100 billion for a fund—dubbed the Vision Fund—to invest in technology companies, the investment community was taken aback. Is it a private-equity buyout fund? Is it a venture capital fund? What will it invest in?

The fund’s sheer size is staggering. In May, it closed on $93 billion in capital, and Son expects the fund to reach the $100 billion mark by end of the year. That dwarfs any private equity or venture capital (VC) fund ever raised in history.

Even its list of backers is impressive. Besides SoftBank, which is contributing $28 billion, investors include sovereigns Saudi Arabia and United Arab Emirates, corporations including Apple, Foxconn, and Qualcomm, and influential individuals such as Oracle founder Larry Ellison.

The drive to invest $100 billion in emerging technology comes from Son’s belief in the so-called computing singularity, or a point at which artificial intelligence will surpass human intelligence. “I totally believe this concept,” he said regarding singularity at the 2017 Mobile World Congress this year in Barcelona, according to TechCrunch. “If superintelligence goes inside the moving device, then the world, our lifestyle, dramatically changes.”

Son talked about the fund in awe-inspiring, if ambiguous, terms. Surpassing the typical scope of VC funds, the Vision Fund will “help build and grow businesses creating the foundational platforms of the next stage of the Information Revolution” by funding companies with “the potential to address the biggest challenges and risks facing humanity today,” Son announced at the fund’s first close.

Three months and a few deals later, SoftBank and Son’s vision and strategy are coming into focus. The size, scope, and unconventional investment style have the potential to disrupt the technology and VC industry for years to come.

SoftBank and Vision Fund’s complicated investment and joint-venture deal with WeWork provides a glimpse of how Son plans to deploy his massive war chest and augment his existing business.

The deal has two parts. Vision Fund is investing $3 billion to buy direct shares of WeWork, with a post-investment valuation of $20 billion, people close to the deal told the Financial Times on Aug. 25.

Separately, SoftBank itself is contributing another $1.4 billion to form a series of new joint ventures with WeWork to expand its office-sharing operations into China, Japan, and Southeast Asia.

WeWork has 214 buildings in 52 cities and leases temporary office space to established corporations and startups. It has its own list of qualified backers such as veteran VC fund Benchmark Capital.

The deal is unusual in the world of VC investing. Vision Fund’s $3 billion singular investment into one company is already one of the largest deals of the year, given that most VC funds don’t exceed $10 billion in total assets. In addition, SoftBank’s joint venture with WeWork to do business together is rare for a VC sponsor.

At first glance, the WeWork deal is puzzling because it isn’t the type of business the Vision Fund is targeting—it’s not in robotics, automation, or artificial intelligence.

Neither is India’s leading e-commerce site, Flipkart. Vision Fund invested in Flipkart as part of a $1.4 billion financing round this summer. While the amount of the investment was not disclosed, the deal was the biggest ever private investment into an Indian technology startup.

Some of its other holdings do fit the artificial intelligence narrative. During the second quarter, SoftBank transferred its 4.9 percent stake in chipmaker and leading artificial-intelligence developer Nvidia Corp. to Vision Fund. The Financial Times reported that Vision Fund earlier this year bought a 25 percent stake in mobile chipmaker Arm Holdings, which had been acquired by SoftBank last year for more than $30 billion.

In July, Vision Fund led a $200 million Series B funding round into Plenty, a San Francisco-based agriculture technology startup. In the same month, it also invested $112 million into Brain Corp., a San Diego-based startup focused on self-driving technologies.

In assembling an eclectic portfolio of assets under the Vision Fund, Son could be building the 21st-century version of a keiretsu, a group of companies with interlocking ownership and business interests.

“[Masayoshi Son] just wants to do bigger, bolder things. He looks at a 300-year vision, or a 50-year vision. He doesn’t do things with a three-month, six-month, or nine-month process,” former SoftBank President Nikesh Arora told Bloomberg.

“He’s out there busy sowing the seeds for creating this cohesive information revolution.”

The exact time when the so-called information revolution, or singularity, would arrive is unknown. But SoftBank is accumulating a diverse mix of companies embracing such a change. If the future is data-driven, then there need to be systems to process data, and artificial intelligence to act upon data, as well as governance tools to control and guide such intelligence.

Son could be building the 21st-century version of a keiretsu.

Because such a future is still years away, Son needs enough of a capital cushion and a diversified portfolio to withstand eventual failures.

The man Son tasked with spending $100 billion is Rajeev Misra, a technology industry outsider. Misra was head of the fixed income desk at Deutsche Bank in the 2000s. Deutsche’s fixed income desk was known for placing large contrarian bets by traders such as Greg Lippmann, who was famously portrayed in the 2015 film “The Big Short” for betting against subprime mortgage-related securities.

Misra and his well-connected, Wall Street-trained team will look to boost discipline and quantitative analysis to augment Son’s brash, from-the-gut investing style. In an oft-repeated anecdote, Son decided to back Jack Ma only five minutes after meeting him. Son’s conviction ultimately paid off, when his $20 million investment in Alibaba turned into more than $50 billion after Alibaba went public in 2014.

The Vision Fund also has an unusual structure for a fund.

For each $1 outside investors—except SoftBank—contribute, they receive 38 cents in equity and 62 cents in preferred units. The preferred units are debt-like, with a 12-year term and 7 percent annual interest. This structure enables investors to receive a 7 percent return on most of their capital, while only a minority portion of their outlay is at risk in the form of equity. The structure was first reported by The Wall Street Journal.

Some startup investors are also uncomfortable with Vision Fund’s scope, investment size, and unconventional style. It has the potential to disrupt the VC industry, the fundamentals of which haven’t changed for decades.

Especially puzzling to industry experts is SoftBank’s hybrid investment style. Most buyout funds focused on established companies, whereas most VC funds focus on early-stage startups. The Vision Fund dispenses with such conventions.

And that has the potential to perpetuate the existing asset bubble in startup tech companies.

“Most [VC] investors are thinking this is insane. This is crazy,” Mangrove Capital CEO Mark Tluszcz told Business Insider. “Now they’re no longer the big boys on the block and they’re going to have to adjust themselves.

“It’s going to drive up prices, and they’re moaning about it.”