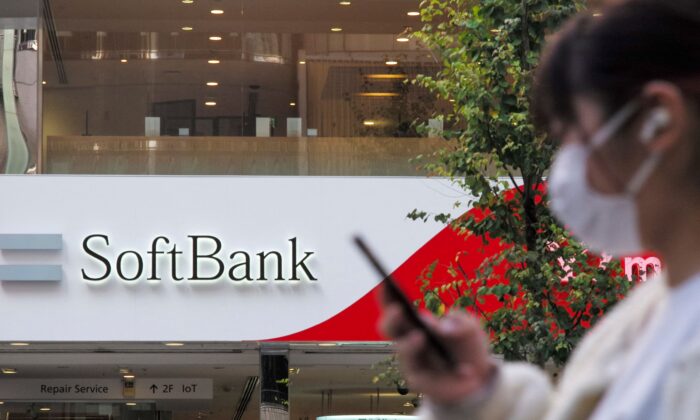 A woman walks past a SoftBank mobile shop in Tokyo on November 8, 2021. (KAZUHIRO NOGI/AFP via Getty Images)
China Business & Economy

Japanese investment giant SoftBank has been bracing for successive financial losses in China, not only because of China’s tighter regulations, but also because its investment business in China’s artificial intelligence technology sector has fallen into the realm of the latest U.S. ban on the Chinese military.

U.S. Treasury Department announced on Dec. 10 that U.S. entities are prohibited from investing in SenseTime—a Chinese artificial intelligence company that is one of the SoftBank investment targets—which has been accused of supporting the Chinese Communist Party’s (CCP’s) use of repressive surveillance technology and is listed on the Chinese Military-Industrial Complex Company list.

SenseTime was scheduled to go public in Hong Kong the same day. The company was valued at $6 billion in 2018 when SoftBank invested $1 billion in it.

A senior Hong Kong trader told the Financial Times that some clients with share orders for SenseTime have warned that they may exit, and the prospect of the company’s Hong Kong listing is likely becoming uncertain.

The U.S. Treasury Department alleges that SenseTime played a role in the CCP’s suppression of Uyghurs by developing a facial recognition program that could identify the target ethnic group, with a particular focus on identifying Uyghurs.

Wang Jun, former director of the international department of Unirule Institute of Economics based in Beijing, told The Epoch Times that it would be “very troublesome” for Chinese high-tech companies, especially those related to the military industry, to go public in the U.S. in the future.

The economic expert believes that Chinese high-tech companies will be scrutinized by U.S. regulators and will be subject to heavy restrictions on raising U.S. capital and acquiring U.S. technology. As a result, it will be difficult for Chinese companies to attract foreign investment.

By leaving the U.S. stock market, the amount of money Chinese technology companies could raise in the future will be greatly reduced. “Hong Kong is not comparable to Wall Street. Hong Kong is a financial market in the Asia-Pacific region, but Wall Street is the financial center of the world,” said Wang Jun.

SoftBank’s other major venture investment in China is Didi, a Chinese ride-hailing service. On Dec. 3, after six months of joint scrutiny by seven official departments of the Chinese Communist Party, Didi announced that it had delisted from New York—it listed for only 156 days—and moved to Hong Kong. As of that day, Didi’s market value was $37.6 billion, a 44.3 percent drop from its offering price. Softbank from 2016 to 2017 spent $10 billion on Didi’s strategic finance, which was then valued at more than $50 billion.

An updated financial report (pdf) released by SoftBank showed that from July to September, the combined loss of the bank’s affiliate Vision Fund, the largest technology-focused equity fund in the world, reached 825.086 billion yen (about $7.209 billion), it surpassed the record single-quarter loss in the early pandemic outbreak.

Masayoshi Son, CEO of SoftBank, said the company is currently amid a “blizzard” and the value of net assets, one of the most important economic indexes, fell by more than $77 billion in one year, reported Securities Times, a Chinese financial media, on Nov. 9.

As the largest shareholder of Alibaba, China’s e-commerce leader, the share market value that SoftBank held shrank by $53 billion in the third quarter when Alibaba’s share price has braced for an accumulative fall of 34.7 percent from July to September.