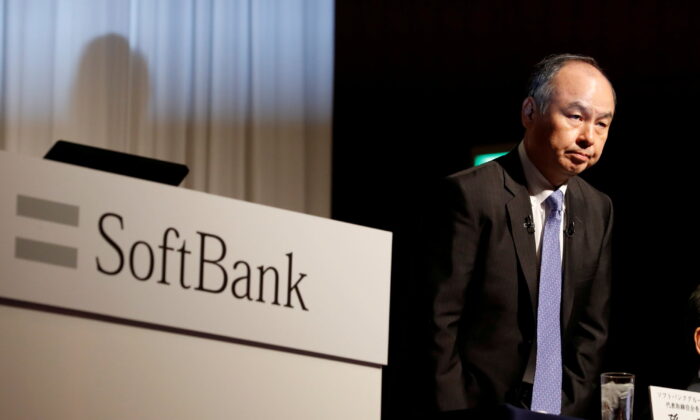 A look at SoftBank's China dealings
By Jenny Li

Japanese tech investment giant SoftBank Group has decided to sell one-third of its Alibaba stake to raise $34 billion in cash, following a record $23.4 billion loss in the second quarter. Founder and CEO Masayoshi Son admitted at a press conference that he is “quite embarrassed and remorseful.”

Furthermore, China’s regulatory crackdown on various sectors, such as technology and education, has affected major Chinese companies that SoftBank has invested in.

SoftBank announced on Aug. 8 that it lost $23.4 billion from April to June as it was hit hard by a global tech sell-off. This was another huge loss after posting a loss of $12.7 billion in the first quarter.

SoftBank invested nearly $1 billion in SenseTime in July 2018. However, on Dec. 10 last year, just as SenseTime was preparing to go public in Hong Kong and investors were looking forward to reaping profits, the U.S. Treasury Department included the company on its “Chinese Military-Industrial Complex Company” list, citing that its facial recognition technology aids the Chinese authorities in monitoring Uyghurs.

When SenseTime applied for a patent, it emphasized that its technology could recognize hard-to-identify Uyghurs with beards, sunglasses, and masks.

SenseTime was finally listed in Hong Kong, but its stock plummeted by more than 50 percent in June, evaporating HK$90 billion (about $11.5 billion).

At the Aug. 8 press conference announcing the quarterly report, Son said, “When we were turning out big profits, I became somewhat delirious, and looking back at myself now, I am quite embarrassed and remorseful.”

He added that although the “stock market is down so much” and seems to be an opportunity to reinvest, he is unwilling to take more risks.

“If I act on it, we could suffer a blow that would be irreversible, and that is unacceptable,” he said.

He pledged to preserve cash and be “more selective in making investments” because “the market and the world are in confusion.”

Son made similar comments at a shareholder meeting in June and emphasized a cautious approach on China investments. “We have to watch [Chinese] government policy with caution and not be reckless,” he said.

Since Son founded SoftBank in 1981, he has made hundreds of investments. Still, most of those deals failed, and his reputation as a savvy investor builds almost solely on his investment in Alibaba. Son invested $20 million in Alibaba in 2000, and the return was a stake worth $130 billion in 2018.

Inspired by his success in Alibaba, Son wanted to make another splash in the China market. Didi Chuxing, the Chinese version of Uber, became one of his bets. Son began to invest in Didi in 2017 with an initial injection of $8 billion. As of June this year, SoftBank Group has invested as much as $12 billion in Didi and became Didi’s top shareholder with a stake of 21 percent.

On June 30, 2021, Didi ignored warnings from the Chinese authorities and went public in New York as planned, raising $4.4 billion at $14 per share. The central authorities immediately punished Didi for its “disobedience” and cited cybersecurity concerns, sending Didi shares tumbling.

Another heavy blow to Son’s China investment came from the education sector.

Shanghai-based education company Zhangmen, established in 2005, features an app that allows students from kindergarten to high school to receive one-on-one online tutoring on all school subjects. It gained attention in 2020 from institutional investors—including Shunwei Capital, SoftBank Vision Fund, Canada Pension Plan Investment Board, International Finance Corporation (IFC), and Genesis Capital—as Chinese students had to take online courses at home amid the COVID-19 pandemic. By October 2020, Zhangmen’s app had attracted more than 40 million users in more than 600 cities in China.

However, it turned out to be a short-lived success. In the following month, China’s education authorities rolled out the “double reduction” policy, claiming that the purpose was to cut down on homework and off-campus tutoring programs.

Due to restrictions imposed on after-school programs, Zhangmen had to lay off more than a thousand employees, and the headquarters terminated its office lease.

In June 2022, just one year after its listing, Zhangmen was forcibly delisted from the NYSE.