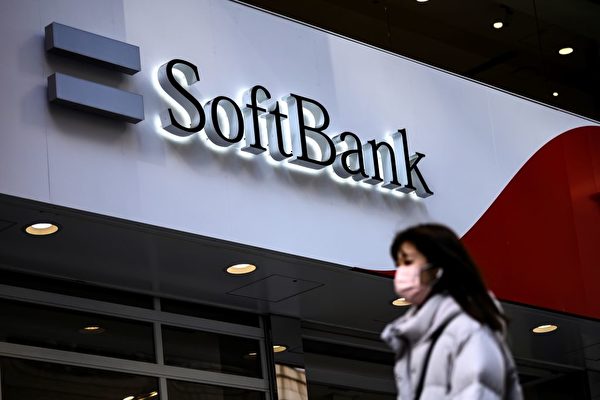 A pedestrian walks past the logo for telecom and investment giant SoftBank Group in Tokyo on February 8, 2021. (Charly Triballeau/AFP via Getty Images)
Asia & Pacific

SoftBank Group Corp., a Japanese venture capital firm, announced its performance for the second quarter (April – September) on Nov. 8. Its Vision Fund lost $7.96 billion, resulting in a $3.58 billion loss in investment income, down $21.98 billion from the same period last year. Chinese media have called it the biggest “victim” of the collapse of China’s internet giants.

After that, he showed a video of a relentless winter blizzard—symbolizing SoftBank’s plummeting second quarter results.

As for SoftBank’s assets in China, in addition to the sharp drop in Alibaba Group’s share price, Son also pointed to the collapse in the market value of Didi Chuxing Technology Co. in the past three months, which reduced the ratio of assets in China to net asset value to 36 percent as of Sept. 30. SoftBank’s investment in Korean e-commerce company Coupang (NYSE: CPNG), whose stock plunged, also contributed to the huge loss.

For Vision Fund, the value of its assets in China fell to $1.20 billion over the past three months from $13.43 billion. The Fund now has 19 percent of its investments in China, 35 percent in the United States, and 46 percent in the rest of the world.

Both Alibaba and Didi have seen their market values plummet as Beijing authorities clamped down on internet tech giants. Moreover, the downturn in China’s education sector and property market is directly related to Beijing’s policy shift. During the Q&A session, however, Son said he would continue to invest in China.

Although SoftBank has suffered huge losses in the Chinese market in the past three months, the risks are still manageable, Son said. Regional and industry factors will be considered in investment to reduce risks as much as possible. Japanese companies are usually small and it is difficult to find suitable unicorn (companies) to invest in. SoftBank has already invested in one and will continue to look for others.

KE Holdings’ newly released financial report shows a net loss of approximately $274 million from July to September, according to Sina Finance. Due to the tightening of financing conditions in the real estate sector in China, some real estate developers are experiencing liquidity constraints. The property market in China is gradually cooling down, and naturally KE Holdings has been hit.

The report also showed that the net income of second-hand housing transaction services between July and September was about $900 million, compared with about $1.4 billion in the same period last year.

At the earnings conference, Son also announced plans to buy back $8.8 billion of the company’s shares from Nov. 9, 2021 to Nov. 8, 2022. SoftBank’s shares are now worth less than their actual net asset value, and Son plans to boost shareholder returns through buybacks.

China’s internet giants have been hit hard, but the biggest “victim” has turned out to be Japan’s SoftBank Group, Chinese media reported. However, SoftBank’s investment of more than $20 million in Alibaba in 2008 reportedly rose to $55 billion by the time Alibaba went public in 2014. Between 2016 and 2020, the Group has cashed out more than $28 billion by reducing several holding-shares.

With huge losses now, Son still insists on investing in the Chinese market. He may be looking for the second Alibaba. On Nov. 10, China’s Gaussian Robotics announced the completion of a $1.2 billion third round of financing, with Vision Fund as one of the leading investors.