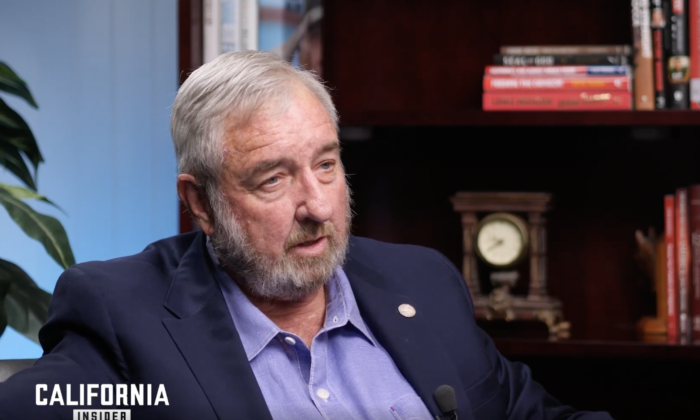 The District Attorney’s woke policies are contributing to the increase of not only the “smash-and-grab” robberies but other violent crimes in Los Angeles County as well, a former district attorney told the EpochTV’s “California Insider” program.

“In many cases, if they had a real prosecutor in Los Angeles, those crooks would be in prison. They would not be out committing these crimes,” Steve Cooley, the former three-term Los Angeles County District Attorney from 2000 to 2012, said in an interview that premiered last week. “So a lot of them have been released. … They’re taking advantage of the situation.”

“Every category of crime is up. And some categories, it’s way up, like homicides,” Cooley said.

“I think the public has become very aware very quickly how bad things are in Los Angeles in terms of crime, and their vulnerability for [being] potentially victimized,” Cooley said, referring to the new wave of smash-and-grab robberies.

“They’re smart enough to realize that the chances of them being caught are greatly reduced. And the chances of them being punished significantly, are greatly reduced under Gascón,” Cooley continued. “If you walk into a jewelry store, in three minutes, you can gather tens of thousands of dollars of jewelry. And they go after high-end beauty products, designer purses, things of that nature, these are valuable. And they go on the internet, and otherwise, and they sell them for a lot of money. So it’s profitable, not being deterred, and they’re getting away with it.

“They all know about Gascón and the soft policies. They all know that juveniles, even if they commit multiple murders, will never, ever be tried in adult court, even though they’re age 16 or age 17. They know this, and they take advantage of it,” Cooley said.

In the yearly review (pdf) released early this month, Gascón listed some “bold steps” that he’s proud to have taken toward reforming the criminal legal system, such as no longer charging children as adults; eliminating many sentencing enhancements; ending the death penalty in Los Angeles County; removing cash bail for misdemeanor or nonserious or nonviolent felony offenses; and holding accountable law enforcement officers who violate the law.

At the time, Gascón told news outlets there were “many complexities” to the crime increase, adding his policies “absolutely [do] not” have any responsibility for the higher homicide rate and a rash of smash-and-grab robberies.

“That’s why in Beverly Hills, they’ve had a spate of robberies by juveniles, gunpoint armed robberies, and the juveniles are put out there by adults because they’re not going to suffer any punishment. They will not even be charged with armed robbery under Gascón’s policies,” Cooley said.

Cooley pointed out that one restaurant in Beverly Hills went to the U.S. Attorney’s Office to file charges because they didn’t think Gascón would hold the suspects accountable. “That’s never happened in the 171-year history of Los Angeles County.”

“Zero bail impacts all crime,” Cooley said. “That means those people are not brought into court arraign and then asked to post a certain amount of bail, so they will return and face the system.”

Early this month, 14 suspects allegedly involved in 11 smash-and-grab robberies in November were arrested but quickly released hours later because of zero-bail policies. They remain free while awaiting their cases to play out in court.

“But more importantly, Gascón files the least charge he can, and it is the charge that determines the amount of bail,” Cooley continued.

“If you go out and commit a robbery and you use a gun, and you shoot somebody in great bodily injury, and you have a prior robbery, serious or violent offense, since he doesn’t file those additional enhancements, no matter how serious that robbery is, the bail is going to be same as the guy who just committed robbery—did not inflict bodily injury, did not have a criminal history, did not use a gun—because it’s the enhancements and the charge itself that determined the amount of bail.”

The solution is to recall Gascón, Cooley suggested.

“Recall this guy and recall him in a way that is overwhelming and sends a message: We reject your philosophy towards crime punishment,” said Cooley.

In October, the first attempt to recall Gascón failed because it didn’t gather enough signatures. A second-round recall petition started early this month.

“That is the only way we’re gonna be able to get back to where we were—when I was District Attorney, which was fair and accurate justice according to the law, and the lowest crime rate in 60 years,” said Cooley.

“The way you get to a low crime rate is selecting those very bad, dangerous people who have committed crimes, and then put them in prison according to the law.”

Gascón’s office hasn’t responded to a request from The Epoch Times for comment.