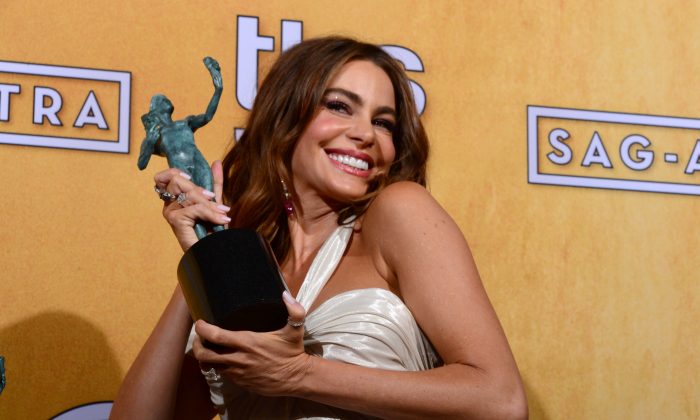 Actress Sofia Vergara poses with the Screen Actors Guild Award for Oustanding Prformance by an Ensemble in a Comedy Series for Modern Family in the press room at the Shrine Auditorium in Los Angeles on January 27, 2013. (Frederic J. Brown/AFP/Getty Images)
Entertainment

“He was already married with a big wedding and I was already married with a big wedding, so we’re going to something but not right now,” she said. “When he proposed, it was my birthday, and I’d flown more than 100 family and friends to Mexico for six days of partying. It took me forever to arrange the logistics! If I had known I was going to get engaged, I don’t do this stupid birthday.”

Vergara also told the magazine she has frozen her eggs and if she and Loeb want to have kids together they will use a surrogate, because she had thyroid cancer and lots of radiation.

She told Cosmopolitan that she doesn’t have much planned for the next five years, except for possibly having a child. “I am going to be working my whole life,” she said. “I love making money. I really love it!”

Vergara is on the June cover of the magazine, on newsstands on May 7, and the full interview will be inside.