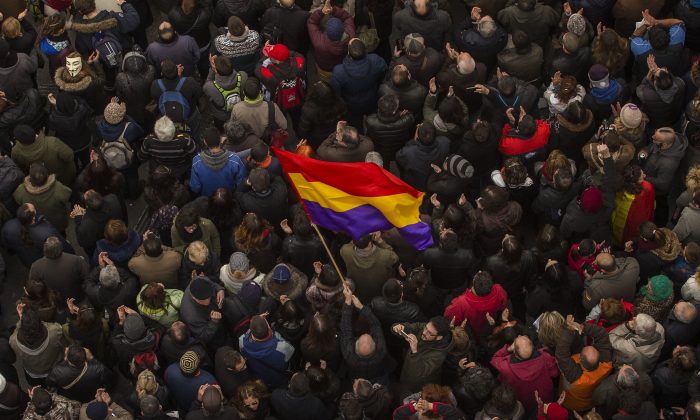 A man waves a Republican flag as people gather in the main square of Madrid during a Podemos (We Can) party march in Madrid, Spain, Saturday, Jan. 31, 2015. Tens of thousands of people possibly more are marching through Madrid’s streets in a powerful show of strength by Spain’s fledgling radical leftist party Podemos (We Can) which hopes to emulate the electoral success of Greece’s Syriza party in elections later this year. (AP Photo/Andres Kudacki)
Europe

The effort by Pedro Sanchez, leader of the Spanish Socialist Workers Party, to form a government on March 2 brings to mind the story of the hunter who goes into the forest with one bullet in his rifle. Seeing a deer on his right and a boar on his left, he shoots in the middle.

Sanchez’s search for a viable coalition partner began when the ruling right-wing Popular Party (PP) took a pounding in Spain’s Dec. 20 election, dropping 63 seats and losing its majority. Voters, angered by years of savage austerity that drove poverty and unemployment rates to among the highest in Europe, voted PP Prime Minister Mariano Rajoy out and anti-austerity parties in, although leaving the PP as the largest single party in the parliament.

The only real winner in election was the left-wing Podemos Party, which took 20.6 percent of the vote. The Socialist Party actually lost 20 seats, its worst showing ever, and at 22 percent, barely edged out Podemos. And if the Spanish political system were not rigged to give rural voters more power than urban ones, Podemos would have done much better. The Socialists and the PP are particularly strong in rural areas, while Podemos is strong in the cities.

While a candidate in Madrid needs 128,000 votes to be elected, in rural areas as few as 38,000 votes will get you into the parliament. Podemos and the Socialists both won over five million votes, with the difference only 341,000. But the Socialists took 89 seats to Podemos’s 65.

Spaniards voted for change, but the Socialists, who ran an anti-austerity campaign, chose to form an alliance with the conservative Ciudadanos or Citizens Party, which refuses to have anything to do with Podemos—and the feeling is mutual. Ciudadanos also underperformed at the polls. Ciudadanos was predicted to get as much as 25 percent of the vote and surpass Podemos, but instead came in under 14 percent with only 40 seats.

On the surface the only thing the Socialists and Ciudadanos have in common is their adamant opposition to Catalonia’s push for a referendum on independence. Podemos is also opposed to a Catalan breakaway, but supports the right of the region to vote on the matter.

Catalonia’s drive for independence is certainly controversial and would have a major impact on Spain’s economy, but exactly how the Spanish government thinks it can block a referendum is not clear. And if Catalans did vote for independence, how would Madrid stop it? One doubts that the government would send in the army or that such an intervention would be successful.

Indeed, the fierceness with which the PP, Socialist Party and Ciudadanos oppose the right of Catalans to vote is more likely to drive the province toward independence, rather than discourage it. At this point Catalonia’s voters are split slightly in favor of remaining in Spain, although young voters favor independence, a demographic factor that will loom larger in the future. In provincial elections last September, candidates who supported independence took 47.7 percent of the vote.

The Socialists had a path to form a government, but one that would have required the party to modify its position on a Catalan referendum. If it had done so, it could have formed a government using Podemos, the Republican Left of Catalonia (ERC), the Basque Nationalist Party (EJA-PNV), Canary Islanders, and a mix of independents. Had the Socialists compromised on Catalonia, they might even have picked up the votes from the center-right Democracy and Freedom Party (DIL).

Left parties in the Parliament can put together 162 votes on their own, which is short of the 176 needed to form a government. But it would not have been impossible to pick up 13 more votes from the mix of 14 independents and eight seats controlled by the Catalan DIL.

Choosing Ciudadanos as a partner makes little sense. Podemos immediately dropped cooperation talks with the Socialists and sharply criticized Sanchez for not building a genuine left government. Ciudadanos’ economic policies are not much different than the PP’s, plus it opposes abortion, and is hawkish on immigration. In any case the party did poorly in the national elections. The merger “prevents the possibility of forming a pluralistic government of change,” according to the parliamentary deputy and Podemos spokesperson, Inigo Errejon.

“Negotiate with us,” Podemos leader Pablo Iglesias told Sanchez, “stop obeying the oligarchs.” The Socialist Party leader pleaded with Podemos to vote for him so that the Socialist-Ciudadanos alliance could pass “progressive” legislation like raising the minimum wage and addressing the gender wage gap. The Socialists also presented a plan to tax the wealthy, improve health care, and try to stop the growth of “temporary” worker contracts that have reduced benefits and job security.

But those issues do not really address the underlying humanitarian crisis most Spaniards are experiencing, like poverty and growing homelessness, and the damage austerity has inflicted on education and social services. And Ciudadanos’ views on abortion, immigration, and privatizing public services are repugnant to Podemos.

Spain’s unemployment rate is still over 20 percent—far more among the youth in the country’s south—and many of the jobless will soon run out of government aid. While the economy grew 3.1 percent in 2015 and is projected to grow 2.7 percent in 2016, it is not nearly where it was before the great 2008 financial crisis and the implosion of Spain’s enormous real estate bubble.  On top of which, that growth rate had nothing to do with the austerity policies, but instead was the result declining value of the euro, low interest rates, and cheap oil.

If the Socialists have no success in forming a government, there will be new elections, probably in late June. Polls show the outcome of such a vote would be similar to the last election, but Spanish polls are notoriously inaccurate. In the last election they predicted Ciudadanos would eclipse Podemos. The opposite was the case.

The right-wing Popular Party is likely to do worse, because it is mired in a series of corruption scandals over bid-rigging and illegal commissions. In Valencia, nine out of the 10 PP councilors are considered formal suspects in the case. Indeed, the Party’s reputation for corruption makes it difficult for any other grouping in the parliament to make common cause with it. And even if Ciudadanos dumped its anti-corruption plank and broke its promise never to cooperate with the PP, such a government would still fall short of the 176 votes needed. The PP controls 119 seats.

In part, the Socialists are frightened by the growth of Podemos and the fact that it might replace them as the number two party in the parliament. In part, the Socialists also tend to run from the left and govern from the center, even the center-right. That is a formula that will simply not work anymore in Spain. The domination of the Spanish government by the two major parties since 1977 is a thing of the past, having been replaced by regional and anti-austerity parties like Podemos.

Before the recent election, the two major parties controlled between 75 percent and 85 percent of the voters. In the December election, they fell to just over 50 percent.

A more successful model is being built next door in Portugal, where the Socialists united with two left-wing parties to form a government. All the parties involved had to compromise to make it work, and the alliance might come apart in the long run. But for now it is working, and the government is dismantling the more egregious austerity measures and has put a halt to the privatization of public services like transportation.

Spain’s Socialist Party is riven with factions, some more conservative than others. Sanchez—whose nickname is ” El Guapo” (handsome)—has so far out-maneuvered his party opponents, but this latest debacle will do him little good. He did receive support from the party’s rank and file for the Ciudadanos move, but that led nowhere in the end. Sanchez got 130 votes in the first round and only picked up one more vote in the second round.

Another election will probably not produce a sea change in terms of party support, but voters may punish the Socialists for their unwillingness to compromise. Those votes are unlikely to go to Ciudadanos, and the PP is so mired in corruption that it will struggle to keep its current status as the largest party in the parliament. A recent poll taken after Prime Minster Rajoy passed on trying to form a government found that 71 percent of the voters felt that the PP did not have the best interests of Spain in mind. That refusal may come to haunt the PP in June.

Podemos will undoubtedly pick up some Socialist Party voters, but probably not enough to form a government. That will only happen if Socialists put aside their stubborn opposition to a Catalan referendum and help build what Podemos calls a “genuine” leftist government.

Conn Hallinan is a columnist for Foreign Policy in Focus (FPIF), where this article was originally published.