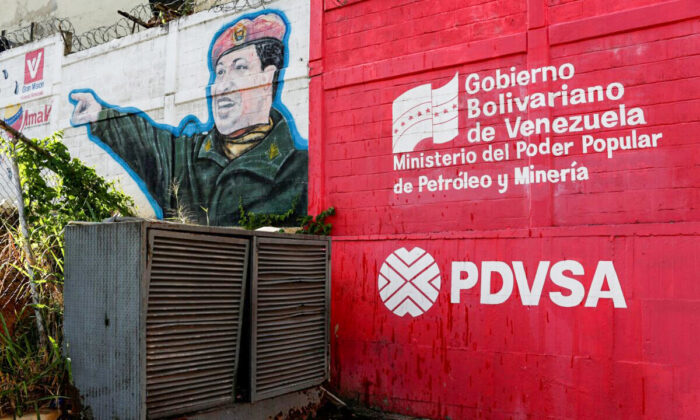 The logo of the Venezuelan state oil company PDVSA is seen next to a mural depicting Venezuela's late President Hugo Chavez at a gas station in Caracas, Venezuela, on March 2, 2017. (Carlos Garcia Rawlins/Reuters)
Environment

'Why does it [Venezuela] seem to get a pass' compared to Bolsonaro’s Brazil?
By Nathan Worcester

On Oct. 25, a Center for Strategic and International Studies panel discussed some of the environmental damage occurring in Venezuela, which has been led since 1999 by socialist Hugo Chavez and, since Chavez’s death in 2013, socialist Nicolás Maduro.

Sponsored by the U.S. Agency for International Development (USAID), much of the event focused on the damage caused by Venezuela’s offshore oil drilling, which has caused many under- or unreported spills, including near vulnerable coral reefs at the marine Morrocoy National Park, as well as drilling in Lake Maracaibo.

As many as 50,000 oil leaks and spills occurred between 2010 and 2016 across Venezuela, including Lake Maracaibo, as drilling rigs, thousands of miles of aging pipelines, and storage tanks in need of repair are decaying or leaking, according to a NASA report that cited information from news agencies, environmental groups, and human rights advocates.

According to Eduardo Klein, an associate professor in the Department of Environmental Studies at Venezuela’s Simon Bolivar University, oil spills are “very lightly taken” in the country, in part because the industry is under government control via the state-owned oil company, PDVSA.

Klein added that Venezuela partners with companies and countries, including Russia and Vietnam, with poor environmental records.

Klein blamed the startlingly high rate of oil spills on multiple factors. Among them the fact that the government relies on old, poorly maintained infrastructure and cannot effectively clean up spills when they happen.

What’s more, it does not typically issue official statements on spills.

Cristina Burelli, a Venezuelan American entrepreneur who leads the environmentalist V5Initiative, told the panel that Venezuela’s ecologically damaging activities are “inherently tied to its political situation,” as the Maduro regime is sacrificing its natural resources and biodiversity to shield itself from “mounting international pressure.”

Burelli has also been a liaison for the pro-environmental group SOSOrinoco, which works undercover to expose the Maduro regime’s environmental and humanitarian crimes in southern Venezuela, including its partnerships with FARC and other left-wing Colombian guerillas.

Panelists also took a question from a listener who wondered why Venezuela “[seem]s to get a pass” as compared with Brazil, led by the conservative Jair Bolsonaro.

“Why haven’t we heard about it [Venezuela] up to this point?” the listener was quoted as asking.

Michael Eddy, an acting regional administrator for USAID, said that Brazil is considered synonymous with the Amazon and with climate change, making it seem like a natural focus for environmental campaigns.

Earlier in the discussion, Eddy had credited Brazil, but not Venezuela, with partnering with USAID to balance economic development with rainforest conservation.

Francisco Dallmeier, the Venezuelan-born director of the Center for Conservation and Sustainability at the Smithsonian Conservation Biology Institute and the National Zoo, said that many Venezuelans who would speak out may not feel safe doing so.

“Being there, you have to think every day, how am I going to survive?” said Dallmeier.

Burelli, of the V5Initiative, said that Chavez and Maduro had both been very adept at pitching themselves as pro-environment and pro-indigenous.

“Nobody really checked to see if that was true,” she said.

Panelists agreed that the country’s oil spills and illegal mining should no longer be obscured.

“The world needs to know what is happening in Venezuela,” said Klein.