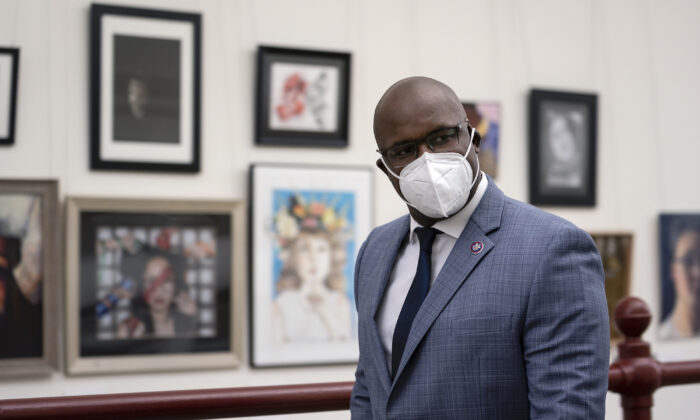 Rep. Jamaal Bowman (D-N.Y.) wears a mask as he walks through the Canon Tunnel to the U.S. Capitol in Washington on Jan. 12, 2021. (Stefani Reynolds/Getty Images)
Democrats

A subgroup of the Democratic Socialists of America (DSA) is calling for the expulsion of Rep. Jamaal Bowman (D-N.Y.) from the organization following his participation in a diplomatic trip to Israel in early November.

The Palestine Solidarity Working Group (PSWG), a subgroup of the DSA, criticized the trip in a public letter.

“Last week, Congressman and DSA member Jamaal Bowman took part in a propaganda trip to Israel that was sponsored by J Street —a pro-Israel lobby group,” the statement began.

The letter continued with a critique of a photo-op with Bowman and Israeli Prime Minister Naftali Bennett , whom the PSWG described as “ a war criminal and former head of the Yesha Council, the political organization representing illegal Israeli settlements.”

The letter denounced the sponsor of the trip, J Street, as a “Zionist propaganda organization.”

“The DSA, BDS (Boycott, Divest, and Sanction), and Palestine Solidarity Working Group (BDS WG) condemns these actions in the harshest terms and, in line with local chapters across the nation, demands that the National Political Committee (NPC) hold Bowman accountable to DSA’s principles, policies, and resolutions, including on Palestine and BDS,” the group demanded.

The DSA, which is one of the largest socialist groups in America, has the express goal of replacing capitalism with “democratic socialism,” which it defines as “a system where ordinary people have a real voice in our workplaces, neighborhoods, and society.”

Bowman is one of several members of Congress who are part of the group. Other lawmakers associated with the group are Reps. Rashida Tlaib (D-Mich.), Alexandria Ocasio-Cortez (D-N.Y.), and Cori Bush (D-Mo.).

The group has pushed strongly for initiatives such as universal health care, the Green New Deal, and other economically and socially left-wing policies. The group also has taken a position strongly in favor of the Palestinians over Israel.

Specifically, they gave Bowman—who holds economically far-left views and supports the Defund the Police movement—a tripartite ultimatum, including a promise to uphold the BDS movement against Israel, to support Palestinians through legislation in the U.S. Congress, and to commit to not returning to Israel or Palestinian areas as part of a larger travel boycott against Israel.

The statement concluded, “For now, it is of the utmost importance that [DSA leadership] not shirk its responsibility to its membership, Palestine Solidarity partners, and Palestinians everywhere by seriously exploring the types of accountability mechanisms (i.e. censure and/or expulsion) that DSA members are calling for, not just for Bowman, but for all endorsed candidates who are consistently and substantially out of step with DSA’s positions on any platform issue.”

In a response to these demands, the National Political Committee, which runs the DSA, issued its own statement.

“DSA unapologetically stands in solidarity with the Palestinian people in their ongoing struggle for liberation,” the statement said. “Our platform proudly states continued support for and involvement with the Palestinian-led Boycott, Divestment, and Sanctions (BDS) movement, and efforts to eliminate U.S. military aid to Israel, while resisting the ‘normalization’ of relationships between the Israeli government and other governments.”

The letter assured members of the group that the National Political Committee “is treating [the issue] as its highest priority.”

DSA leadership said that it would meet with Bowman soon, but gave no commitment to remove the congressman from the organization. Bowman hasn’t commented publicly on the issue.

Despite his close ties with the DSA, Bowman has a track record of endorsing policies beneficial to Israel.

In the past, Bowman has opposed BDS and other anti-Zionist policies. In September, Bowman also broke with “the Squad” [Reps. Ocasio-Cortez, Tlaib, Ilhan Omar (D-Minn.), and Ayanna Pressley (D-Mass.)] and voted with the House to grant Israel an additional $1 billion in U.S. funding to replenish Israel’s “Iron Dome” missile defense system following attacks.