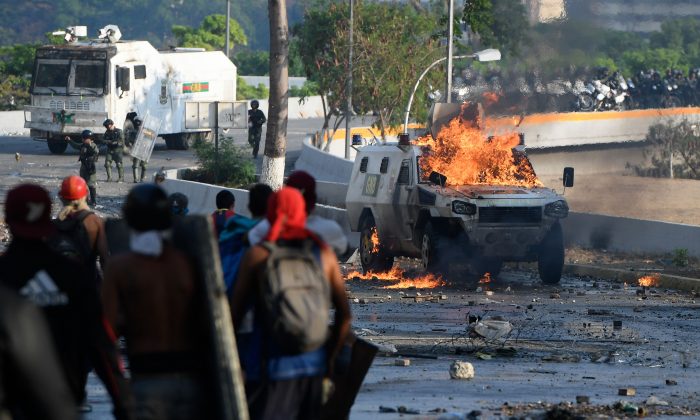 Protesters opposed to the socialist regime in Venezuela clash with security forces during the commemoration of May Day in Caracas, Venezuela, on May 1, 2019. (Federico Parra/AFP/Getty Images)
Viewpoints

Socialism is inseparable from tyranny, and even if it were to work economically it would still be evil by nature, according to Justin Haskins with the Stopping Socialism Project at the Heartland Institute.

Haskins is the author of “Socialism Is Evil,” and as the book’s name suggests, he explains the moral problems that socialism unavoidably brings to a society. By its nature, he explained, socialism tramples on individual beliefs and values.

A problem people often have when trying to understand socialism, Haskins said, is that it’s often discussed from an economic and historical perspective, and not from a moral perspective.

“One of the things that we found is when you started talking to people about socialism, and you would say things like, well, look at Venezuela, look at the Soviet Union, and look at China, look at Zimbabwe, look at all these places where it’s failed,” he said.

Yet, the individuals they speak with often respond by claiming their visions of socialism are different, and believe they can do it better, or that the numerous failed examples were caused by bad leaders and not by the system itself. This same logic has allowed socialism to continue its cycles of destruction as history repeats itself.

To get through to people who believe this, Haskins said, they took a jump in logic: imagining that socialism in full practice would work, and explaining the impact of its proposed rules.

“Even if it works, and it never works—but even if it could work—there’d be all these moral problems. And so that’s when we started focusing on this idea that socialism is evil,” he said.

A main concern among many people who believe in socialism is on the centralization of power in big corporations. Yet, while socialism does aim to “seize the means of production,” it doesn’t do away with big business or factories—it merely puts these institutions under government control, and denies the average person the ability to produce or trade. Socialism was the “dictatorship of the proletariat,” or what Lenin called the “state-capitalist monopoly.”

Meanwhile, many problems the world now sees with big corporations and monopolies come from interventionist policies and government subsidies—both of which are part of socialism. Tight regulations eliminate mid-level business, and government subsidies create surpluses that drive down prices and shut down small businesses. It’s for these reasons, and others, that even when lightly practiced socialism leads to oligarchy.

Socialists going back the Karl Marx focus their narratives on how society is giving small groups too much power, and the centralization of power with big corporations is among their key narratives today.

“Bernie Sanders talks about all the time that the wealth is concentrated in the hands of this small group of people,” Haskins said. Yet, he noted socialism doesn’t get rid of this problem: it merely centralizes power with another small group, and inevitably gives them even more power over the lives of others than the big corporations had.

“Their solution is to take that power away from the old Jeff Bezos and Bill Gates, and people like that, and put it in the hands of the government, which is another relatively small group of people where they’re centralizing all of the power,” he said.

And history has shown socialism has this trait: destructive dominance over individual will, and a willingness to kill or imprison anyone who resists.

“What’s worse? Having some wealth controlled by a relatively small group of people—but you have all of your other freedoms—or having the government in charge of everything, which is essentially what they’re all calling for,” he said.

Haskins noted that many socialists are duped to trust government with their rights more than regular people.

Many people who believe in socialism mistake it for a form of charity, without taking into account that its seizing of wealth from others cannot exist without the threat and use of force.

Haskins said many people are told that socialism represents the fight against big powers, “when in reality it is the opposite of what it says it is. It represents that big centralized power.”

“I think for so many people, socialism is basically—in their minds—it’s charity,” he said. Many people who believe this come to see people who oppose their system as heartless people who don’t care about helping the poor, he said.

“But in order for it to be charity, there has to be voluntary choice. I have to choose to help these people,” Haskins said. “I don’t have any choices under this current system. The way it works is they come in. They take my money away from me. They decide what to do with the money. They decide who to help, and most of it ends up going into the bureaucracy, and it gets lost, and it doesn’t end up helping anybody, anyway.”

“So it’s not charity,” he said. “It’s always forced coercion and manipulation no matter what. No matter how you structure it, that’s what it is.”

Haskins noted that he’s very much in support of charity, and in helping people in need, but socialism eliminates even this choice since high taxes are seized automatically to subsidize socialism’s ineffective bureaucracy.

Among the major talking points used by today’s socialist leaders is the claimed “Nordic Model,” yet this narrative is based on untruths.

“Many people have been convinced that Scandinavian countries are perfect little socialist utopias,” Haskins said. The point is often brought up by socialists when confronted with facts about the numerous systems of socialism that led to economic collapse, state slavery, mass starvation, and democide, he said.

“We can talk about it all day long—all the failures,” he said. “But then the left has pointed to these five or so relatively small countries that exist in a part of the world that basically nobody ever goes to. No one knows anything about these countries. And then they call them socialist countries.”

“They have balanced budgets. They have a trillion dollar sovereign wealth fund in Norway that they got from drilling oil,” Haskins said. “Does that sound like the modern Democratic Party’s platform right now? Balanced budgets, less regulations, having $1 trillion sitting in the bank? I mean, of course not.”

“They’ve actually reversed many of the policies that they started putting into place 40 to 50 years ago or so,” he said. “And once they started reversing those policies, their economies started to improve again.”

In light of this, he noted that when socialist advocates use the “Nordic Model” as their talking point, “it’s a lie.” Haskins noted that the Scandinavian countries have adopted some socialist policies, but so have nearly every country in the world—including the United States. The talking points, however, are used to promote more complete forms of socialism that the Nordic Model does not represent.

Yet, there’s something still deeper to the problems of socialism that go beyond the surface talking points, and into what socialism means in practice.

“It’s a highly immoral system. And the reason for that is predominantly because in socialism you cannot have freedom of conscience or freedom of religion. It is impossible,” Haskins said, and noted that socialist writings make clear its intentions to eliminate moral and religious society.

“If you have a collectivist society where decisions are being made by the collective … you don’t have any options,” he said.

Under single-payer health care, he noted that if the collective decides it wants things like abortion, then people whose values oppose financing abortion will be forced to violate their values.

“The same is true for almost anything. Anything you’re socializing,” he said.

When it comes to agriculture, which he noted is historically a very common area for socialism to control, people such as Hindus who oppose killing cows, or vegetarians who oppose killing animals, can be forced to finance policies that violate their values—if the collective decides on it.

If people such as Muslims oppose consuming alcohol, they can be forced to finance the production of alcohol.

And if people decide they will refuse to pay or refuse to participate in the socialist programs that violate their values, then the socialist collective will either force them or persecute them. This train of events has repeated itself under the various systems of socialist tyranny.

By forcing people to participate in various programs that violate religious belief and personal values, socialism opposes tolerance and diversity.

Haskins noted that socialism has been tried in all parts of the world over the last 100 years, and continues to fail. He said, “If it was going to work, it would have worked by now.”

“More than 167 million people have been exiled in prison or killed by socialist and communist parties of the past 100 years on every continent where there are human beings,” he said. “There’s a reason for that, and we’re seeing that same tyranny crop up again.”

Yet, even aside from its history of failure, he said, “even if somehow magically we could defy all of history and logic and make that work, it would still be highly immoral.”

“You’re still imposing your beliefs on the beliefs of other people. You’re still forcing other people to violate their deeply held ethical beliefs, whether those are religious or not religious. And that’s an essential part of any socialist model.

“It has to be that way. You can’t get around it because getting around it would mean there’s choices. You can’t have choices and a socialist model—that’s the whole point.”