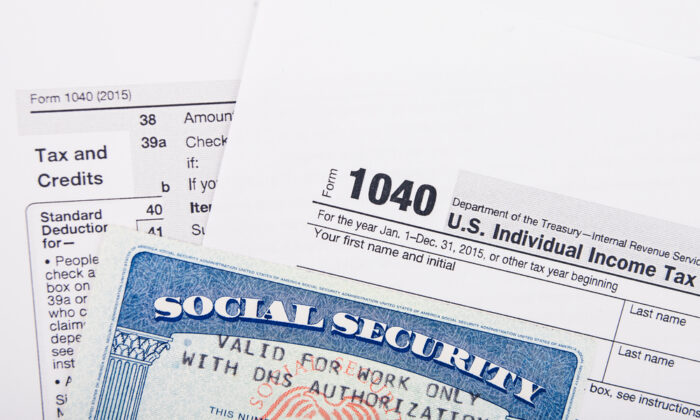 SSI is a federal welfare program that has absolutely nothing to do with Social Security other than the fact that it happens to be managed by the Social Security Administration. (Popartic/Shutterstock)
Business Columnists

Social Security has a problem. As Democrats push to expand entitlements to include free preschool and subsidized child care, little attention is getting paid to the fact that Social Security is a financial trainwreck.

“The program’s payouts have exceeded revenue since 2010, but the recent past is nowhere near as grim as the future. According to the latest annual report by Social Security’s trustees, the gap between promised benefits and future payroll tax revenue has reached a staggering $59.8 trillion. That gap is $6.8 trillion larger than just one year earlier. The biggest driver of that move wasn’t Covid-19, but rather a lowering of expected fertility over the coming decades.” – Stark Realities

When Franklin D. Roosevelt first enacted social security in 1935, the intention was for it to serve as a safety net for the elderly. However, at that time, life expectancy was roughly 60 years of age. Therefore, expectations were that participants would not be drawing on social security for very long from an actuarial basis. Furthermore, roughly 16-workers paid into social security for each welfare participant.

Of course, given that politicians like to use government coffers to buy votes, additional amendments got added to social security to expand the participation in the program. This included adding domestic labor in 1950 and widows and orphans in 1956. They lowered the retirement age to 62 in 1961 and benefits increased in 1972. Then politicians added more beneficiaries, from the disabled to immigrants, farmers, railroad workers, firefighters, ministers, federal, state, local government employees, etc.

While politicians and voters continued to add more beneficiaries to the welfare program, the number of workers steadily declined. Today, there are barely two workers for each beneficiary.

As we will discuss, “Demography is destiny.”

While Uncle Sam has $5.9 trillion in assets, the $129 trillion owed in bills—including military and civilian retirement benefits—means the U.S. is in the hole for $123 trillion. Just the unfunded liabilities in Medicare and Social Security add up to $96 trillion.

It is an incredible amount coming due over the next 75 years. The Treasury Department sticks its proverbial head in the sand and does not even list the liabilities on the balance sheet of the federal government.” – Adam Andrzejewski

Let that soak in for a minute.

Currently, most people suggest that a few minor tweaks, such as increasing the retirement age, can solve the long-term funding problem.

They Could Not Be More Wrong

How do we know this? Because adjustments made previously to the welfare programs still fell well short of future assumptions.

For example, in 1977, Congress passed an amendment that altered the tax formulas to raise more money, increasing withholding from 2 percent to 6.15 percent. As President Jimmy Carter remarked, “Now this legislation will guarantee that from 1980 to the year 2030, the Social Security funds will be sound.”

The financial picture declined almost immediately, and by the early 1980s, the system was again in crisis. Then, In 1983, a panel investigated the long-run solvency of Social Security, and in 1983 amendments were put into place to raise social security taxes and raise the full retirement age.

Once again, these fixes failed to fix the long-term funding problem of the welfare program for the simple reason that increasing taxes on a declining number of individuals won’t cover the growing number of welfare recipients.

Today, the problem remains the same. Increasing taxes and extending retirement ages won’t solve the long-term insolvency of too many beneficiaries.

The only reality is that eventually the benefits promised to the elderly will likely not get paid in full. Or, the younger generation, who vote for socialism, will be saddled with trillions in extra taxes with nothing in return.

“The unfunded liabilities of Social Security, Medicare, and Medicaid are often omitted from discussions about the large size of U.S. public debt. Once these get considered, it becomes clear that the U.S. government is already bankrupt.

Fiscal policy discussions generally focus on the current year’s budget numbers: $1.0 trillion budget deficit and $16.0 trillion national debt. As alarming as these numbers are, they fail to account for the far greater fiscal challenges of unfunded liabilities. Here is some crucial evidence from various studies:

This money is not due in the future; it’s like a credit card bill the country owes right now. If we don’t pay interest on it, the debt will accumulate. Addressing our unfunded liabilities problem requires fundamental entitlement reform and reductions in federal spending.” – Veronique de Rugy, Mercatus Center

No matter how you calculate the numbers, the problem remains the same. Too many obligations and a demographic crisis. As noted by official OECD estimates, the aging of the population relative to the working-age population has already crossed the “point of no return.”

While politicians and financial gurus suggest that future retirees won’t face a significant shortfall, the problem comes down to fertility rates. So to solve the demographic “timebomb,” either you have to decrease the number of people drawing on the system markedly or massively increase the number paying into it.

A recent study shows the latter is not likely.

Researchers from the Center for Sexual Health Promotion at Indiana University School of Public Health showed Americans continue to have less sex. Research found that 28 percent of adults reported not having intercourse over the prior year in 2018. Adolescents were also increasingly abstinent, with 89 percent reporting not having sex over the previous 12 months in 2018.

Interestingly, the researchers put forth some hypotheses behind the decline in sexual activity:

The problem with less sex, and non-heterosexual identities, are fewer births.

This will exacerbate the problem of social welfare programs as the young and old populations continue to diverge.

As millions of baby boomers begin to retire, another problem also emerges. Demographic trends are relatively easy to forecast and predict. However, each year from now until 2025, we will see successive rounds of boomers reach the 62-year-old threshold.

There is a twofold problem as these successive crops of boomers head into retirement. The first is that each boomer has not produced enough children to replace themselves, which leads to a decline in the number of taxpaying workers. It takes about 25 years to grow a new taxpayer. We can estimate, with surprising accuracy, how many people born in a particular year will live to retirement. The retirees of 2070 were born in 2003, and we can see and count them today.

The second problem is the employment problem. The decline in economic prosperity discussed previously is caused by excessive debt and declining income growth due to productivity increases. Furthermore, the shift from manufacturing to a service-based society will continue to lead to reduced taxable incomes in the future.

This employment problem is critical.

By 2025, each married couple will have to pay, along with their own family’s expenses, Social Security retirement benefits for one retiree. To pay promised benefits, taxes must rise, or other government services must get cut. Back in 1966, each employee shouldered $555 of social benefits. Today, each employee has to support more than $18,000 of benefits. The trend is unsustainable unless wages or employment increases dramatically, and based on current trends, this seems unlikely.

The entire social support framework faces an inevitable conclusion where wishful thinking will not change that outcome. The question is whether our elected leaders will start making the changes necessary sooner, while they can get done by choice, or later when they get forced upon us.

For now, we continue to “Whistle pass the $96 Trillion graveyard.”