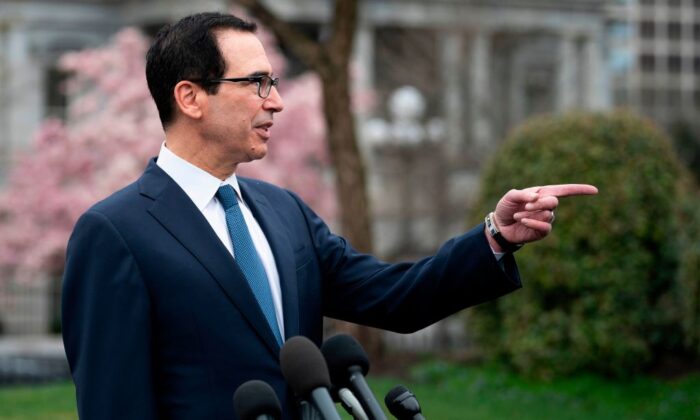 The U.S. Treasury announced that Social Security recipients won’t have to file a tax return to receive a federal government payment to help offset the economic effects of the CCP virus outbreak.

“Social Security recipients who are not typically required to file a tax return need to take no action, and will receive their payment directly to their bank account,” Treasury Secretary Steven Mnuchin said in an April 1 statement.

The Treasury’s statement reverses guidance from the Internal Revenue Service (IRS) on March 30 that said seniors would have to file a “simple” tax return to receive the money.

The payments, as much as $1,200 for individuals, are part of a roughly $2.3 trillion economic relief package signed into law by President Donald Trump last week.

“The IRS will use the information on the Form SSA-1099 and Form RRB-1099 to generate $1,200 Economic Impact Payments to Social Security recipients who did not file tax returns in 2018 or 2019,” the Treasury said in a statement.

“Recipients will receive these payments as a direct deposit or by paper check, just as they would normally receive their benefits,” the agency stated.

The change comes after pushback from lawmakers and advocacy groups, who argued that people such as senior citizens or the disabled shouldn’t have to file a tax return just to get stimulus checks.

A group of 41 senators on April 1 sent a letter to Mnuchin and Social Security Commissioner Andrew Saul saying this would burden the vulnerable and disadvantaged.

“This [IRS] filing requirement would place a significant burden on retired seniors and individuals who experience disabilities, especially given the current unavailability of tax filing assistance from Volunteer Income Tax Assistance and Tax Counseling for the Elderly programs during the COVID-19 crisis,” the senators wrote. “We strongly urge you to ensure that economic stimulus payments are automatically sent to vulnerable seniors and individuals who experience disabilities, without these individuals needing to file a tax return.”

Chuck Marr, director of federal tax policy at the Center on Budget and Policy Priorities, a think tank, said the concept should be expanded to other groups.

“Now it’s imperative that the administration use its authority and the information it already has to do the same for very low-income seniors and people with disabilities who receive Supplemental Security Income as well as low-income veterans who receive certain benefits from the Veterans Administration,” Marr told CNBC in a statement.