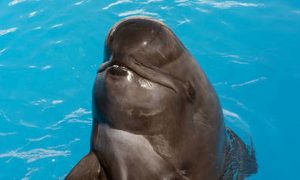 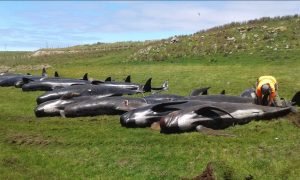 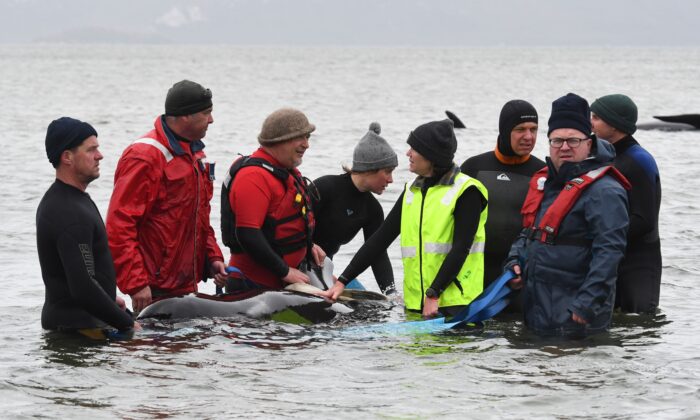 Rescuers work to save a pod of whales stranded on a sandbar in Macquarie Harbour, Tasmania on September 22, 2020. (Brodie Weeding/Getty Images)
Australia

The cause of Australia’s biggest mass whale stranding will likely remain a mystery but the tight-knit, social nature of the species involved may have played a big part.

As of Friday, almost 100 of some 470 long-finned pilot whales had been rescued from sandbars at Macquarie Harbour on Tasmania’s rugged west coast.

The pod got into trouble earlier this week, with efforts now turning to the grim task of disposing 350 carcasses at sea.

Pilot whales are known for stranding in mass groups.

The top five largest beachings in Tasmania, dating back to the early 1800s, all belong to the species.

Marine mammal scientist at Monash University, David Hocking, said pilot whales form strong family bonds and can travel in groups of up to 1000.

“If one or a few animals get themselves into trouble, they put out a distress call,” he told AAP.

“Rather than running away, their instinct is to come together as a group because they have safety in numbers.

“But that means a few animals getting into trouble means they call more animals into that same area.”

Pilot whales usually hunt in deep water for fast-moving prey like small squid and fish, and may have been drawn to the coast chasing food.

The heads at Macquarie Harbour is a stranding hotspot for the species. The area has unique tides, which are controlled by atmospheric conditions rather than the moon.

Despite their name, long-finned pilot whales are more closely related to dolphins and rely on echolocation, a series of rebounding clicks, to navigate.

Hocking said that method doesn’t seem to be suited to shallower, sandy seabed.

“One of the things that might be happening is as these animals are pushing these soundwaves forward, they’re reflecting off the seafloor and bouncing ahead of them,” he said.

“So, the animal feels like it has deep water in front of it and it can’t really work out when the water get shallower.

“As soon as you have a few animals in trouble, and you add in the panic, it gets very disorientating.”

While their social nature can get them into trouble, there is hope the saved pilot whales can reunite at sea.

“Tracking work in the past has shown that animals released individually do re-form after a period,” wildlife biologist Kris Carlyon, who has led the rescue, said.

“They face some challenges for sure but we expect that if they remain at sea … they will regain normal behaviour.”

Carlyon praised “one hell of an effort” from rescuers who have spent hours wading in cold water to free the whales.

He said the pod could have come from anywhere in the region because pilot whales, unlike many other whale species, are not migratory.

About 270 whales were discovered trapped on sandbars on Monday, before a separate group of 200 was found dead on Wednesday.

Pilot whales were also involved in the previous biggest stranding of 320 in Western Australia in 1996.