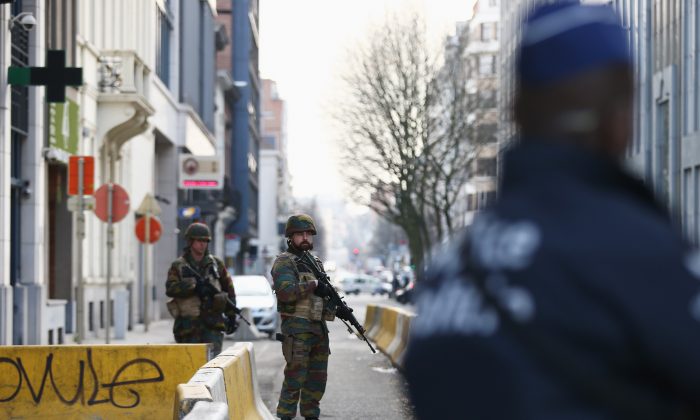 BRUSSELS, BELGIUM - MARCH 22: Soldiers and police officers stand guard outside EU Commission Headquarters following todays attack on March 22, 2016 in Brussels, Belgium. At least 34 people are thought to have been killed after Brussels airport and a Metro station were targeted by explosions. The attacks come just days after a key suspect in the Paris attacks, Salah Abdeslam, was captured in Brussels. (Photo by Carl Court/Getty Images)
Europe

Two bomb blasts went off in terrorist attacks that targeted Maelbeek metro station and Zaventem airport in Brussels, Belgium. While the details and the motives of the attacks remain unclear, people have taken to the internet to comment. Some came to show their support. Others to condemn.

This is really sad. Prayers go out to #brussels 🙏🏻 I have family in Belgium so this really hit close to home

#StopIslam is trending worldwide, there will never be peace in the Western world until Islam is gone

On Twitter the hashtags #Brussels, #PrayForBelgium, and #JeSuisBruxelles have been trending worldwide. The hashtag #StopIslam is also trending.

In a Facebook post on his official page, the Former Belgian Prime Minister Guy Verhofstadt said “Terrorism must never prevail. After Madrid, London, Paris and Brussels today, it is time that Europe unites.”

I am devastated by the cowardly bombings in Brussels today. My thoughts are with the victims and their families….

Facebook activated its Safety Check feature—which allows individuals to confirm that they and their loved ones are safe in the midst of disasters—for its users in Brussels, as it did for its French users during the November 2015 attacks in Paris.

The March 22 Brussel attacks come four days after Belgian authorities arrested Salah Abdeslam, a fugitive involved in the Paris attacks. Latest reports estimate over 30 dead and over 100 injured in the Belgian capital.

Our thoughts and prayers go out to all in #Brussels, and around the world. 💔 Stay safe. We love you. ✍🏻: @geesubay pic.twitter.com/gwzfkkJMvt

I saw the hashtag #StopIslam and I feel physically sick, we should all be standing together not driving each other apart