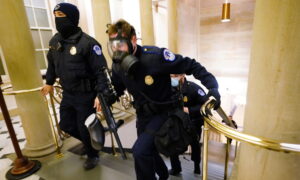 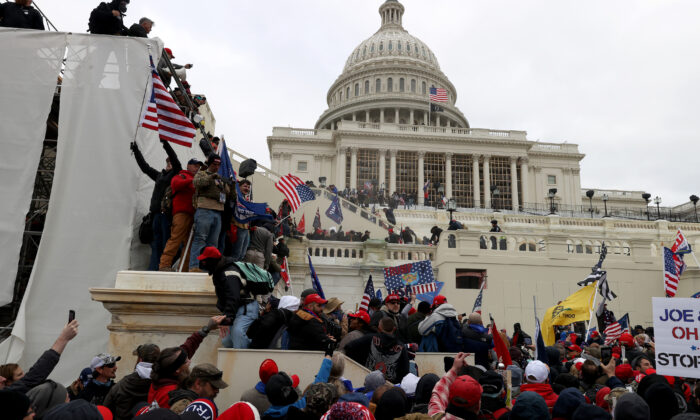 Protesters gather outside the U.S. Capitol Building in Washington on Jan. 6, 2021. (Tasos Katopodis/Getty Images)
US News

A social media post purportedly from a top Justice Department (DOJ) official floating presidential pardons to those involved in the Jan. 6 breach of the U.S. Capitol is fake, the department said on Jan. 9.

The post appears to have originated from a Parler account claiming to be the official social media page of Acting Pardon Attorney Rosalind Sargent-Burns. It states that President Donald Trump “is strongly considering” pardoning “all patriots” who stormed the Capitol on Jan. 6.

The account then asks that anyone who wants a presidential pardon to respond to the post with information including their name, their city, and a list of a “crime you think you need to be pardoned for,” along with an explanation of why they believe they should be pardoned.

“Please share to anyone who may need it, we are trying to stay off the MSM so that the left does not learn of the President’s plan,” the post reads, adding that Trump needs the list by Jan. 12, before the House can vote to impeach him again.

In a statement, a DOJ spokesperson said the post isn’t from Sargent-Burns or anyone from the Office of the Pardon Attorney.

“Please be advised that the information circulating on social media claiming to be from Acting Pardon Attorney Rosalind Sargent-Burns is inauthentic and should not be taken seriously,” a department spokesperson said.

“The Justice Department’s Office of the Pardon Attorney does not have a social media presence and is not involved in any efforts to pardon individuals or groups involved with the heinous acts that took place this week in and around the U.S. Capitol.”

The clarification comes as federal prosecutors released details of some of the first group of people charged for their involvement in the breach on the Capitol, including a Republican West Virginia state delegate who filmed himself making his way into the building, a 60-year-old Arkansas man who was seen in widely circulated photos putting his foot on a desk in House Speaker Nancy Pelosi’s office, and an Alabama man who allegedly drove a pickup truck with 11 Molotov cocktails to the Capitol.

“The U.S. Capitol is one of the most iconic buildings in our country and a symbol of the Constitution and people we have sworn to protect, and its destruction will not be tolerated,” Steven M. D’Antuono, assistant director in charge of the FBI Washington Field Office, said in a statement.