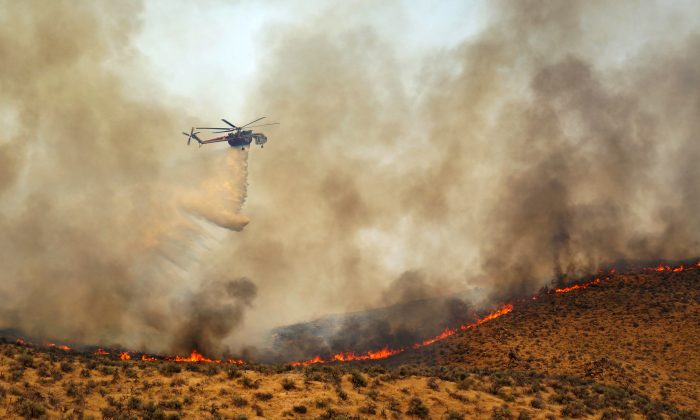 Social Media Lit Up by Firefighters’ Pics of the West Ablaze

Firefighter Stephanie Preheim had only just arrived at the storage facility she was assigned to protect from a massive wildfire near the tourist town of Chelan, Washington, when the winds shifted, pushing the blaze back her way.

Told to stand down, the suddenly sidelined Preheim did what any idled 19-year-old would do—she got out her cellphone, snapped a photo of the smoke-filled scene and posted it on Instagram.

“People always ask ‘How was it?’ and it’s impossible to describe what it’s like fighting a fire,” said Preheim, a volunteer with the Cashmere Fire Department. “If you have a quick second, why not snap a quick photo and be able to share it with people you love and let them know what you’re doing?”

Preheim, and other firefighters like her, are capturing some of the most stunning images of wildfires in the West this season. And that has fire officials grappling with how to approach the digital landscape—even contemplating banning cellphones—as they balance a young workforce’s desire to share with their safety in a hazardous environment.

Hotshot Ian Schlake, who was also battling the fire near Chelan, said in an email from the fire lines that firefighters are like everyone else looking to stay connected in an increasingly digital world.

“I’d like to show people at home the scale of fire, its power and its spectacle. It’s not something we get back home in St. Louis, Missouri,” wrote Schlake, 31.

Utah-based firefighter Eli Peterson’s daredevil Instagram account includes photos of him leaping from a bridge into the water below, rock climbing, and camping along with images of rollicking flames.

But, Peterson, like Schlake, said he won’t sacrifice safety for likes online.

“There are tons more times when I could have taken pictures, but I can’t pull out a camera because it’s not a safe time,” he said.

Fire officials, who have seen an uptick in such postings, warn that the act of focusing on a handheld screen can be deadly when crews are surrounded by danger.

“There have been incidents in the past where firefighters have captured the last moments literally of their lives,” said Dave Teter, deputy director chief of fire protection at the California Department of Forestry and Fire Protection (Cal Fire).

The problem is especially heightened in California as the parched state makes for an explosive fire landscape.

“Burning conditions and rates of spread and the energy release associated with these fires is really unprecedented,” said Teter.

Cal Fire has discussed the possibility of stripping crews of their cellphones, and the idea remains on the table. The agency said for now, however, it’s trying to avoid such a drastic measure.

Casey Judd, president of the Federal Wildland Fire Service Association, a firefighters’ union, said it’s not something he’s worried about.

“Pictures have been taken out on the fire lines forever and it’s a learning tool, too,” he said.

The photos can indeed be used for training and to document extreme fire behavior, like fire tornadoes, points out Jennifer Jones, a spokeswoman with the U.S. Forest Service’s office of fire management.

Even so, the U.S. Forest Service discourages its young workforce from taking the photos and posting them online.

“We understand people wanting that digital scrapbook or having that connection with their families, children, or spouse when it’s at an appropriate level,” said Cal Fire spokeswoman Janet Upton. “But if it’s a picture of someone with their thumbs up and a cheesy grin and a house burning in the background, this is unacceptable.”

Authorities have had firefighters pull videos with audible profanities, but they also acknowledge the eye candy that can come from those out amid the flames.

“They do certainly capture some very nice photographs,” Teter said.