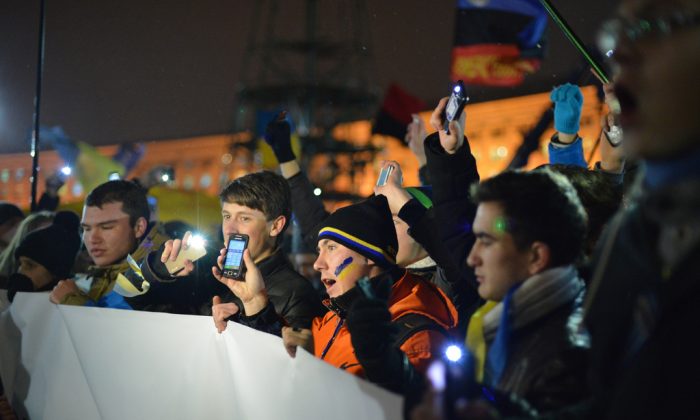 Only several hundred of the most ardent protestors remain in Kiev’s Independence Square, known as Euromaidan to protestors. The holiday season has sapped much of their support as many protestors hailing from Western Ukraine returned home but a sense of futility has also set in. A €15 billion aid deal from Russian president Vladimir Putin has put off economic collapse for the time being and Ukraine’s President Viktor Yanukovych remains securely in power. As the seventh week of pro-European protests draws to a close, there is little sign of a breakthrough.

Although the protests seem to have stalled, the handful of protesters guarding the impromptu barricades that surround Kiev’s central square know that thousands can be beckoned back at a moment’s notice should riot police decide to clear out the encampments housing protesters. Moreover, the government knows that any heavy-handed tactics by police will immediately be filmed and photographed and posted on social media and news sites around the world. Despite their dwindling numbers, President Yanukovych has made it clear that he will tolerate no more missteps from the city’s police and has suspended Kiev’s mayor and a top security official.

Like in many large-scale protests over the past several years, the use of social media to organize and communicate in Ukraine is increasingly receiving attention in the press. A combination of new ubiquitous technologies and evolving generational habits has yielded a potent weapon for activists. The story is still being written in Ukraine, but the different roles that social media has played are beginning to come to light and are interesting to consider.

Reports have credited tweets early on by journalists and activists as the key factor that brought hundreds of thousands of Ukrainians out into the streets on the eve of November 21st. Social media platforms like Facebook and twitter have since become key tools for turning out people as the protests grew from a simple public outcry to a full-fledged social movement. Before dedicated Twitter feeds and Facebook pages were created, protestors followed news using hashtags, a metadata tag used to group messages on a particular topic. Very early on, #Euromaidan emerged as the digital battle standard of protesters along with local variants #Євромайдан in Ukrainian and #Евромайдан in Russian.

An official EuroMaidan Facebook page was quickly created and went on to set a new record in Ukraine, accumulating 76,000 likes in just the first eight days of its existence. The page now counts nearly 170,000 “likes.” The page has been used to inform protesters in real time about urgent news, discuss plans for current and future actions, as well as share advice such as how to deal with police forces. The official Euromaidan Twitter account plays a similar role. To gather all of the disparate information into one place, activists constructed several websites, such as Euromaidan.com, with social media aggregators that pull together posts from across many platforms.

According to a British Academy-funded survey of protestors, large numbers learned about the protests from websites like Facebook (49%) and Vkontakte, a social media site popular among Russophones (35%). Television still remains a top source of information with 48% claiming they came out after watching coverage of the protests on TV, although those surveyed said that they found information on social media to be more reliable than television. Finally, more personal interactions still matter a lot, many that came out said that they made up their mind after hearing from a close friend or family member either in person or via telephone, email or social media.

Once protests began breaking records set during the Orange Revolution back in 2004, organizers began turning to social media to better organize and coordinate their actions, from providing legal assistance to sharing ideas for protest signs. According to Tetyana Bohdanova, reporting in Global Voices, it was the first arrests and instances of police brutality that spawned the Facebook pages dedicated to legal and medical assistance.

The Facebook page Євромайдан SOS (Euromaidan SOS) aggregates reports of police beatings and arrests, followed later by the website Eurozahyst.org. Another Facebook group called “The Revolution’s Legal Department” was set up to provide a forum to discuss the legal dimensions of the protests, share ideas and offer informal advice. Finally, to complement the rudimentary medical facilities set up in Kyiv’s Mykhailivsky Cathedral, medical volunteers created several Facebook pages including Організація волонтерів-медиків (Organization of volunteer doctors) and Майдан.Медики (Maidan.Doctors) to help publicize their services and organize volunteers.

Beyond logistical matters, the power of social media was also leveraged to open up debate among protestors on the future direction of the protests. Because of the grassroots nature of the movement, there is little hierarchy and strategic decisions can be difficult. In early December, the Facebook page НЕ ЗЛИй МАЙДАН (Don’t Ditch Maidan) was set up to propose and debate new ideas for everything from actions to posters.

Social media has played a critical role in informing the outside world of what is going on and also, more importantly, helping to weave a narrative for both protesters and outside observers.

Social media has become a tool of critical importance for resource-strained journalists and, as Oxford University political scientist Olga Onuch discovered, many of the slogans and messages heard at the protests actually went viral online before they were taken up by protesters. This suggests that social media has played a role in helping to formulate the messages and demands of the movement.

For journalists filing copy from around the world, social media offers them a fascinating glimpse at things on the ground and allows them to relay information and images faster and in more detail than ever before. While the information may be recycled on the Internet at a dizzying pace, social media is actually providing real journalists with more resources than ever before for original reporting, even thousands of miles away.

Photo sharing sites such as Flickr allow citizen photojournalists to upload photos copyrighted under a creative commons license that have then been picked up by news organizations around the world, particularly small outlets that may otherwise not have the resources to pay for photos from professional photographers or to send their own reporters into the field. Local aspiring photographer Ivan Bandura has posted hundreds of original photos to the site, including the one used in this article.

Activists are highly aware of the important role that social media plays in communicating their message to the world. They have taken care to create English versions of their official Facebook page and Twitter feed. Of course, while social media can provide many insights, like with old-fashioned reporting, people will sometimes intentionally use social media to spread biased messages. Even people fighting for a noble cause can spread false stories of brutality or injustice to further their cause, although there has been no reports of this in Ukraine.

Finally, ground-breaking research has suggested that social media may be playing an important role in helping the grassroots movement articulate and frame its message. Researchers found that messages in chants and signs on the ground often originated from viral content found on social media.

It remains to be seen if protest organizers will be able to regain the momentum, although it seems the movement will most likely transition into a more classic political movement than continue as street protests. If the protests have ultimately failed to bring about immediate change, it is because of classic political infighting.

The dynamism of the protests was refreshing in the world of Ukrainian politics, but the opposition movement remains fragmented, making it difficult to translate protest into political action. On top of that, President Yanukovych has been able to avert economic collapse while skillfully steering between Europe and Russia, taking much of the urgency out of the country’s situation. Social media may be a powerful tool, but in the end, it is still people that make change.