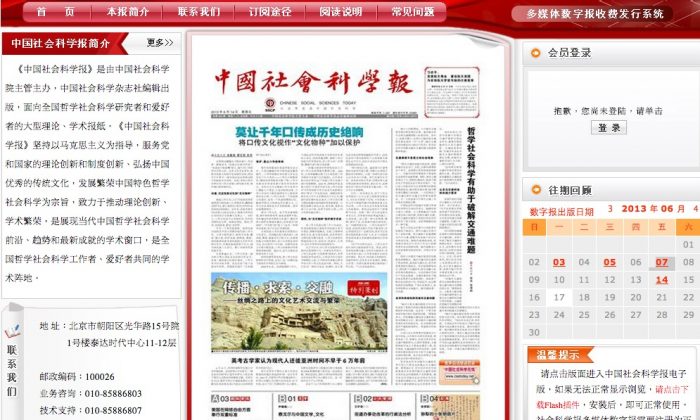 Sina Weibo, a Twitter-like service, is seen through an unforgiving, communist lens
By Annie Wu

Citing the influence of China’s Twitter-like microblogging platforms on public opinion, a People’s Liberation Army (PLA) military officer said in a recent interview that Weibo microblogs endanger national security because they spread ideas of constitutional government, freedom of speech, and other “dangerous” concepts from the West.

In an interview with Chinese Social Sciences Today, Li Dianren, who is a lieutenant general and instructs at the state military academy, PLA National Defense University, named the Internet as the new front in the propaganda war on dissenting views. He listed constitutionalism, economic neoliberalism, and “historical nihilism” as the three major threats to Party ideology.

Li explained the latter as versions of history that “deny the revolution, China selecting the path of socialism, or the Chinese Communist Party’s historical status and role.”

Li condemned such ideas as a multiparty system or separation of powers that originate from the West, saying that they “defame and deny the country’s political system.”

The question and answer with Li was initially published in a ideologically dense Party journal, but was picked up in perhaps a tongue-in-cheek manner by Caijing, a business magazine with liberal leanings. Editors highlighted in bold the more colorful parts of the interview, while nearly 9,000 netizens left comments.

The Chinese Communist Party is known to carry out an intensive and intricate policy of Internet surveillance and censorship; as well as deleting posts, the regime also hires an untold number of online commentators, called the “50 cent party,” (for the amount they’re putatively paid per post) whose job it is to steer public opinion.

Li dismissed those in China who interpreted the “Chinese dream,” Chinese leader Xi Jinping’s recent catchphrase, as a “dream of constitutionalism,” as some liberal intellectuals had wished.

Chinese netizens frequently use Weibo to air their grievances about official corruption, abuse of power, and other injustices they face on a daily basis. Netizens also post and circulate the latest updates on major incidents happening in their locale, which oftentimes expose government failure.

When a high-speed train collided into the back of another in Wenzhou, Zhejiang Province, killing at least 40 people, the authorities first attempted to downplay the story. But after the news broke on Weibo, the relentless public scrutiny made it impossible for officials not to explain what happened.

Weibo has thus become sometimes the only platform where people can openly criticize the Chinese regime and its official propaganda, though “sensitive” topics and search terms are routinely censored. The Committee to Protect Journalists estimates that there are currently more than 309 million users of microblogging platforms in China.

Li warned against academics that post Weibo messages promoting liberalization of banks and privatization of state-owned enterprises and land, as well as “dissident elements” who have amassed a large number of Weibo followers.

To combat “domestic and foreign enemy forces utilizing Weibo to carry out infiltration of thought culture,” Li said there must be widespread propaganda to “guide public opinion” in the regime’s favor, combining the work of state agencies, state-backed scholars, and the propaganda organs and reporters belonging to the military.

Netizens mostly expressed outrage at the rhetoric. One Sina Weibo user, “Be Careful of Landmines 168” posted: “Don’t take us as ignorant masses. We know what’s right from wrong.”

Others attempted to argue back: “Today’s economy is indeed monopolized by officials, that has nothing to do with liberalism … the weapon of the progressive forces is historical realism, not historical nihilism. It is having a realistic attitude toward history, restoring the truth of history and admitting the current reality!” said “Past Events of Autumn.”

Another Sina Weibo user, “Beijing Cook” commented: “The people feed you, give you good liquor to drink, and spend money to support you to buy and manufacture the best weapons for resisting foreign invasion. In the end, you want to aim a spearhead at the people and teach people how to speak, how to use the Internet? What are you soldiers trying to do? Establish a military regime?”