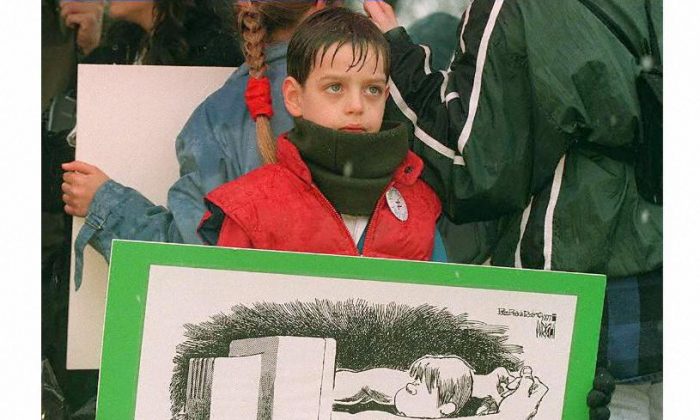 Seven-year-old Mark Rayer of Fairfax, Va., protests child pornography on the internet outside of the US Supreme Court Building in Washington on March 19, 1997. (TIM SLOAN/AFP/Getty Images)
Viewpoints

Social Media and Trafficking of Children for Sexual Exploitation

The buying and selling of human beings is regrettably sometimes as easy as a click on a keyboard.

People, including children, are available for “purchase” with sexual acts as their product to sell. Traffickers target victims and make forms of payment nearly untraceable.

Approximately 2 million children are exploited every year in the global commercial sex trade.

In Malaysia, 80 percent of victims raped by an internet acquaintance in 2015 were children between the ages of 10 and 18.

In 2016, the U.S. National Center for Missing and Exploited Children estimated that 1 in 6 endangered runaways were likely sex trafficking victims.

While the trafficking of children with the intention of sexual exploitation is a global crime, 92 percent of all child sexual abuse URLs are hosted in five countries: the Netherlands, the United States, Canada, France, and the Russian Federation.

Last April, President Donald Trump signed a new anti-trafficking law. The legislation, a hybrid of the House’s FOSTA (Fight Online Sex Trafficking Act) and the Senate’s SESTA (Stop Enabling Sex Traffickers Act), is aimed at curbing sex trafficking online by making it easier for federal and state prosecutors and private citizens to sue website operators whose sites have been used by traffickers.

Websites will now be held liable for the content users post onto their sites and can be prosecuted if they engage in the “promotion or facilitation of prostitution” or “facilitate traffickers in advertising the sale of unlawful sex acts with sex trafficking victims.”

SESTA/FOSTA is a rollback of the protections for online speech in Section 230 of the Communication Decency Act. Section 230 protected interactive computer service providers (ICSPs) from state and civil liability for criminal activities conducted by third parties on their platforms. When classified ads websites were knowingly allowing and facilitating child sex advertising, the existing legislation protected them from criminal charges.

In early April, the U.S. Justice Department announced the seizure of Backpage.com, the internet’s leading forum for prostitution ads, including ads depicting the prostitution of children. Backpage, involved in 73 percent of cases of suspected sex trafficking in the United States, also hosted 60 percent of Canada’s online adult ads.

Operating in about 97 countries, Backpage was the world’s second largest classified advertising website. However, sex ads featuring children in its “adult ads” brought it to a U.S. Senate investigation in 2016 which found that it was facilitating and profiting from online child sex trafficking. It was also using a proxy company in the Philippines to seek out sex traffickers.

SESTA/FOSTA will crack down on sex trafficking by targeting facilitating platforms. Section 230 is amended so that website operators who knowingly assist, support, or facilitate child sex trafficking can be held accountable.

Opponents assert that these websites were safe spaces for adult consensual sex workers who are now at greater risk.

However, SESTA/FOSTA sends a strong message to ICSPs that participating in online child sex trafficking is both immoral and illegal.

A study by the University of Toledo’s Human Trafficking and Social Justice Institute reveals how traffickers, who are master manipulators, target and connect with children on the internet through social media.

Traffickers view posts on commonly used view-and-comment sites such as Facebook, Instagram, or SnapChat, dating apps such as Tinder, Blendr, and Yellow, or webcam sites like Chatroulette and Monkey.

The study describes posts that attract the trafficker and gives examples of strategic responses the predator employs to build trust and groom the child.

The 2017 documentary film, “I am Jane Doe,” details the fight against child sex trafficking online.

Caryl Stern of UNICEF USA urges, “Unless we act now to keep pace with and find innovative solutions to rapidly evolving risks online, we will leave children more vulnerable to violence, exploitation, and abuse.”

Children under 18 represent one in three internet users worldwide. We must put them at the heart of digital policies to end online child exploitation.