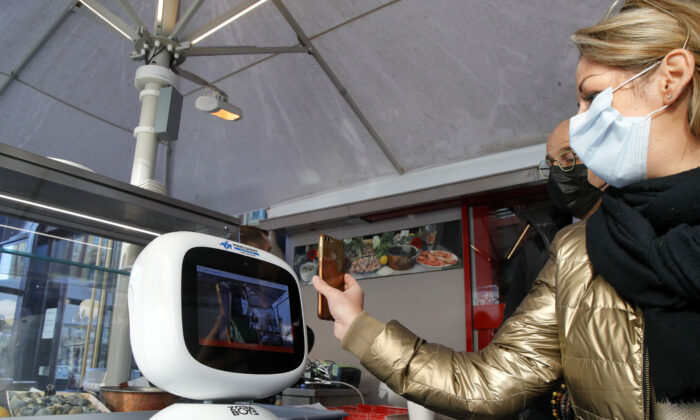 A machine checks a woman's vaccine pass, at a restaurant in Lille northern France, on Jan. 24, 2022. (Michel Spingler/AP Photo)
Europe

France’s government has announced the creation of a new digital identity app for citizens to access both public and private services, coming just days after President Emmanuel Macron’s reelection.

The biometric app, known as the “Digital Identity Guarantee Service,” was signed in a decree issued by Prime Minister Jean Castex and Interior Minister Gerald Darmanin, according to a translated statement published on the French government’s website. It will allow French citizens to have a digital ID card, which is also in compliance with the European Union’s European Digital Identity package.

It will allow users to scan their physical identity card, which will be used to access services, according to French outlet BFMTV. The digital identity app will not record fingerprints, but it will have details such as a photo, email and physical addresses, date of birth, and names.

The app “allows the user, in particular, to generate electronic certificates containing only the identity attributes whose transmission he considers necessary to third parties of his choice,” according to the French government decree.

Although the government published some details of the decree, it’s not exactly clear how broadly the app will be used across French society. During the COVID-19 pandemic, France was among the first European countries to adopt a vaccine passport system, which impacted restaurants, salons, and some forms of public transportation.

When the decree was signed this week, the leader of the Les Patriotes, Florian Philippot, called on French voters to resist the measure. Philippot said the move is tantamount to a social credit system—similar to the one used by the Chinese Communist Party—to track and punish people.

“Just after the election, the government announces the launch of ‘a digital identity application,'” he wrote on Twitter. “The goal: to put social credit in the Chinese way. Control and surveillance company!

Critics of digital identification, including the American Civil Liberties Union, have said such proposals would significantly imperil users’ privacy.

“Second, a poorly constructed digital identity system could be a privacy nightmare. Such a system could make it so easy to ask for people’s IDs that these demands proliferate until we’re automatically sharing our ID at every turn—including online. Without good privacy protections, digital IDs could also enable the centralized tracking of every place (again, online and off) that we present our ID,” said the ACLU last year in a statement.

Meanwhile, French voters will again head to the polls in June for parliamentary elections, where Macron’s party could face the risk of losing its majority.

The European Union is slated to introduce a digital identity application in 2022, according to a statement last year from European Commission President Ursula von der Leyen.

“It will allow everyone to control their identity online, and to interact with governments and businesses, across the EU,” von der Leyen said.