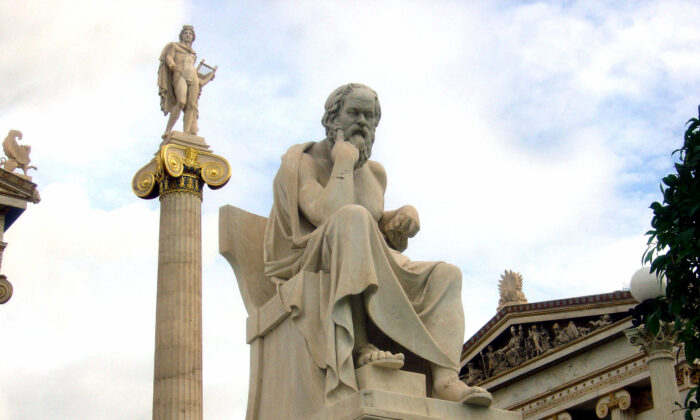 A statue of ancient Greek philosopher Socrates in front of the Academy of Athens in Greece. Traditionalists have a well-grounded intuition that the customs and practices they follow have been rationally and empirically demonstrated over time. (Dimsfikas at Greek Wikipedia/cc-by-2.0)
Viewpoints

Why Tradition Matters to Social Conservatives

It seems that the oxymoronic “Progressive” is about to be put back in “Conservative,” as so-cons are being politely but firmly invited to become ex-cons. In the current protracted debate about the direction of Canada’s federal Conservative Party, it is hardly surprising that the beau monde has concluded that social conservatism is a vestigial atavism that must be amputated if the party is to ever again achieve electoral victory.

Progressives are constantly reminding us about how “tolerant” and “open” they are to new ideas, “diverse” viewpoints, “alternative lifestyles,” and so on.  Conservatives, by contrast, are hostile to free inquiry and experimentation, blindly tethered, as they have always been, to authority and tradition.

This, as any thinking person should realize, is simplistic, polemical nonsense. If social conservatives respect tradition, it is because tradition is the product of eons of critical reflection and rational experimentation. But traditionalists also recognize the difference between open-mindedness and empty-mindedness.

The Democracy of the Dead

Traditionalists have just enough humility to acknowledge that it is unlikely that, sitting alone in the solitude of their studies and owning no more than the meagre quotient of intelligence and life experience with which any single individual can ever hope to be endowed, they alone could come up with a better solution to the problems besetting humanity than those hammered out at some point during the half-million-year history of human reflection and trial by the cumulative genius of mankind that preceded their glorious birth.

Though I’m no paragon of Socratic humility, I hesitate to pit my lonely intellect against a collective brain trust that includes the likes of Johnson, Pope, Milton, More, Erasmus, Pico, Aquinas, Boethius, Augustine, Aristotle, Plato, and, well, Socrates.

Even the most “knee jerk” adherents of tradition have a well-grounded intuition that the customs and practices they follow have been rationally and empirically demonstrated over time.

If today’s cabinet makers “mindlessly” continue to build carcasses and drawers with the same old dovetail joints as have been sawn and chopped since the William and Mary period, it’s because they know that after having experimented with butt joints, rabbets, tongues and grooves, round dowels, square pegs, iron pins, steel screws, hide glue, glue from fish bones, and probably human spittle, their predecessors long ago agreed that the dovetail was a superior mechanism. In putting two pieces of wood together at right angles along the end grain, the dovetail joint works splendidly within the limitations fixed by the nature of the material and the laws of geometry.

Traditionalists accept the immutable conditions of the world into which they have been born, and woodworkers are no different. (They’d certainly regard as a lunatic any cabinet maker who built drawers using an inferior joint for the sake of novelty.)

Most traditional social or moral arrangements—the nuclear family, with its division of labour; the prohibition against adultery and premarital sex; the abhorrence of infanticide and abortion—were established in the mists of antiquity, but then only at the end of an earlier, protracted period of human experimentation and adaptation. A traditionalist is one who has the sense to recognize when the experiment has succeeded, and to stop, on the principle that there is nothing more mindless—because it is insane—than to go on experimenting for experiment’s sake.

But we are a culture confused: In some cases, we treat a hyperactive compulsion for change with Ritalin; in others, we elect its sufferer prime minister.

Of course, “knee jerk” and “mindless” are insults to which the enemies of tradition have staked a proud and exclusive claim. Progressives have always regarded traditionalists as craven and uncritical conformists (whereas they, by contrast, are fearless free-thinkers whose every opinion has been won in a protracted agon of self-examination and untrammeled rational inquiry). It is, moreover, in brave defiance of their relentless persecutors (here cue the music of the Inquisition, the Salem witch hunt, or the McCarthy hearings) that they display their hard-won laurels of victory.

The truth, however, is that those who reject tradition tend to do so as reflexively and out of as servile a submission to authority as any medieval divine. It is just that the authorities they venerate are more recent and modish. Chesterton said that tradition is “the democracy of the dead”; progressives believe in a tradition that is the oligarchy of the fashionable. (Whether it is rational to conclude that the world view of today’s sages is more just and wise than that of the perennial consensus of historical humanity, merely because its advocates are currently breathing and capable of filling a lecture hall, remains an open question.)

No era in history has, in any case, ever achieved a more perfect and universal conformity of thought, taste, dress, and demeanour than our own “progressive” age, or exhibited a more slavish subjection to authority. In university, I remember the free-thinking and free-loving opponents of mindless tradition carrying around copies of Chomsky and Mao’s Little Red Book and quoting verses from John Lennon and Bob Dylan in the same transports of ecstasy as any Bible-thumping Southern Baptist quoting from the Book of Revelation.

Today’s undergraduates carry copies of Derrida and Foucault and cite apocalyptic predictions from “An Inconvenient Truth” or “St. Greta the Prophetess.” Modern anti-traditionalists even willingly don the habits of their religious order: in the Sixties, jeans and Mao jackets; today, Nikes and backwards baseball caps. It’s getting harder and harder to take their lectures about mindless conformity and reverence for authority seriously.

If traditionalists are supposedly enslaved to a static past, progressives are surely enslaved to a fleeting present. And their serial submission to the dogma du jour makes for an amusing spectacle in which they are constantly changing masters: from Marx to Mao, to Greer to Gore, to Greta to Ocasio-Cortez, to who-knows-whom. Their appetite for authority is apparently so insatiable that, whenever the obsolescence of intellectual fashion or the vicissitudes of history conspires to liberate them from one form of it, they rush headlong into the shackles of another.

Give me the stability and wisdom of tradition any day.

Harley Price
Follow
Harley Price has taught courses in religion, philosophy, literature, and history at the University of Toronto, U of T’s School of Continuing Studies, and Tyndale University College. He blogs at Priceton.org. His upcoming book, "Give Speech a Chance: Heretical Essays on What You Can't Say, or Even Think," will be available in November.