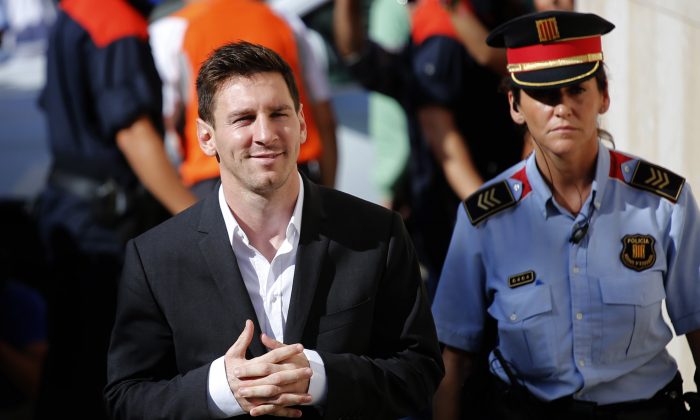 A Barcelona court on July 6 sentenced soccer star Lionel Messi and his father to 21 months in prison for tax fraud–but they won’t actually serve time.

Messi, 29, and his father, Jorge Horacio Messi, were found guilty of three counts of defrauding the tax department of 4.1 million euros ($4.6 million).

They are accused of using offshore companies in Belize and Uruguay to reduce tax on Messi’s income from image rights from 2007 to 2009. Messi’s father argued that he was told by a legal adviser that the practice was legal.

Because their sentences are less than two years, they are suspended and neither Messi will go to jail.

During the trial, which lasted four days, Messi and his father denied any wrongdoing, and both said the soccer player did not know about the tax problems that led to fraud.

The sentence can be appealed.

Messi, who plays for Spain’s FC Barcelona, received support from his team after the court’s decision.

“FC Barcelona gives all its support to Leo Messi and his father with relation to the sentence for tax evasion handed out by the Provincial Court in Barcelona today,” the team said in a statement. “FC Barcelona continues to be at the disposal of Leo Messi and his family to support him in whatever action he decides to take in defence of his honesty and his legal interests.”

Messi was named in the Panama Papers scandal after the massive Mossack Fonseca data leak earlier this year.

Spanish tax officials said on April 4 they launched an investigation on the accusations of tax irregularities involving Messi after the leak.

The Messi’s responded in a statement claiming they were not guilty of any wrongdoing. They also threatened to sue media outlets if they released information that linked the Barcelona player to accounts in Panama.

The data leak shows that Messi and his father owned another offshore company in Panama: Mega Star Enterprises. The first reference to the company in the Panama Papers was on June 13, 2013—a day after authorities in Spain filed tax fraud charges against the soccer star and his father, according to the International Consortium of Investigative Journalists (ICIJ). June 23, 2013 was the first reference in the records that showed the Messis owning the Mega Star company.

The Panama Papers include the names of almost 20 well-known soccer players, current and former, from clubs like Barcelona, Manchester United, and Real Madrid, according to the ICIJ.

The court decision comes after Messi hinted he would retire after missing a penalty kick and losing the Copa America final against Chile at the Metlife Stadium in New Jersey, on June 26.

The Fútbol Club Barcelona player has taken the Argentine team to four finals, but has not been able to win a trophy.

Although Messi lost the Copa America final, he broke an Argentinian soccer record during the tournament. He has surpassed Gabriel Batistuta as the country’s highest goalscorer of all time. Messi earned the recognition after scoring his 55th goal for the national team during the match against the United States in front of 70,000 spectators in Houston.