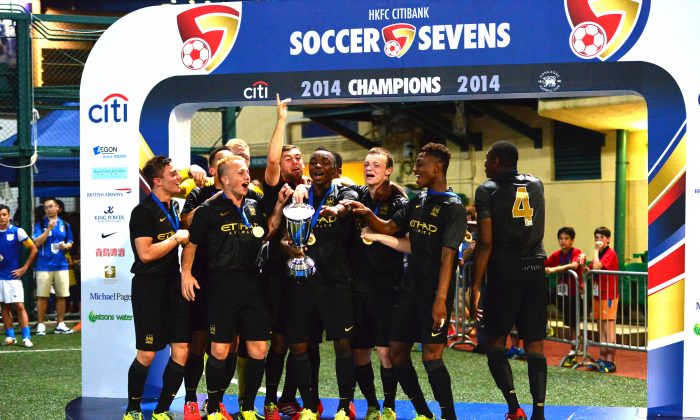 HONG KONG—The Manchester City under-18 development team achieved further success for their illustrious club by clinching the Hong Kong Football Club Citibank Sevens 2014 Cup on Sunday May 25. In addition to their Premier Side winning the English Premier League the Under-18 squad was also fresh from clinching the England U-18 title.

Jubilant squad coach Jason Wilcox explained: “We did not do any preparation for this tournament because we were playing in the U18 Final just before we came so we had no preparation at all. We were learning on our feet so to speak, which is an even bigger achievement.”

Playing in front of a near capacity crowd, City edged out local First Division Champions Kitchee by a narrow 2-1 margin. Kitchee scored first but City equalised 4-minutes into the second half and added another goal four minutes later leaving Kitchee little time to retrieve the situation.

Making the victory all the sweeter was the fact that the England Premier Club’s side was fielding a team of mainly Under-18s with the average age of the players at 17 years against an older and more experienced Kitchee.

Kitchee and Hong Kong International Lam Ka-wai were visibly disappointed at their loss to City.

“We were that close. We know this game better as we rely on a short passing game and I thought, better ball control,” said Lam.

“But it seemed City came fully prepared. They were faster and more hungry and were willing to run for every ball,” he added.

“There was no way through their defenders and it seemed we just ran out of gas towards the end as I guess it may have been the heat and humidity that took its toll on us,” he said.

City coach Wilcox was proud his side had done a great job in taking on an older and more experienced side and the win was especially delicious, as his young team had just lifted the Premier League Under-18 crown and this caps the end to their long and successful season.

He then went on to explain his thinking when City went one goal down: “I always felt the longer we were in the game the more chance we had of getting back into it as we are an extremely fit group, we have got pace to burn all over the pitch and we have got clinical finishers.

“Full credit to them [the squad] the credit goes to the 10 players, it’s not just 7 players that played the game it’s for the squad. Some were disappointed not to play in the final but it’s a squad game and squads win tournaments,” he explained.

Route to the Finals
After Saturday’s round robin action in the main cup competition, five of the foreign seeded professional sides proceeded to the cup competition, but in Groups-B, -C and -D the seeded favourites received upsets. In Group-B, Kitchee beat Chelsea 1-nil and forced the latter into the plate competition.

In Group-C, HKFA U-23 upset Guangzhou Evergrande, who lost each of their group games, while in Group-D, HKFA U-21 upset last years Cup winners, Leicester City, by beating them 1-nil, sending Leicester City into the plate competition to meet Chelsea in the Quarter Finals.

In Masters qualifying most seeds performed as expected, though the overall seeding was impacted with the emergence of local ‘dark horses’, USRC, who defeated Rangers Legends 3-1 showing their abilities and quality.

Manchester City reached the Cup final after winning their Quarter Final 3-1 over HKFA U-23’s, followed by a 3-2 comeback Semi-final extra time win over Sunderland who had knocked out Aston Villa, winning 1-nil in the quarter final.

City’s opponents in the Final, local champions Kitchee disposed of HKFA U-21 in the Quarter Finals, followed by a 3-2 Semi-final defeat of Newcastle United.

Cup Final
The Final itself was played in a very attacking way by both sides, Kitchee opened the scoring just before half time when captain Lo Kwan-yee deflected in Jordi Tarres shot. Man City started the second half with determination to get back into the game, but were thwarted and frustrated by an equally determined opponent in Kitchee. Kitchee saw a thunderous shot by Tarres rebound off of the left hand goalpost in the third minute of the second half, only to see Manchester City find a break of their own, ending with a 20 yard strike by player of the tournament Brandon Barker into the roof of the net for a fine equaliser.

Barker sealed the result and a fine comeback victory a few minutes later when he cut inside from a left wing run and firing a shot across the goalkeeper and inside the far post.

Kitchee had little time to recover and City wound up champions at the second attempt with the 2-1 victory.

Sheild and Plate Finals
Aston Villa took home the shield with a 3-1 Final win over Rangers, with Jack Grealish scoring two fine individual goals and setting up the other for Johnson, Leicester City won the plate beating BC Rangers 2-nil in the final and HKFC won the Masters Plate with a 1-nil win over Singapore Cricket Club.

Masters Final
In the Masters Cup final, Aegon Ajax All stars, who had looked favourites with many clear victories, came up against the speedy USRC who had prevailed against a number of more fancied opponents. It was a cagy game with the older Aegon Ajax side wary of being stung by a rapid counter from a more youthful USRC opponent, and the game petered out to a final nil-all draw at full time. However, in the sudden death golden goal four minute period of extra time, when teams are reduced to four players, and where both sides replaced their goalkeepers, the game was settled when Olaf Lindebergh advanced to fire a deflected shot into the net for an Aegon Ajax 1-nil full-time win.