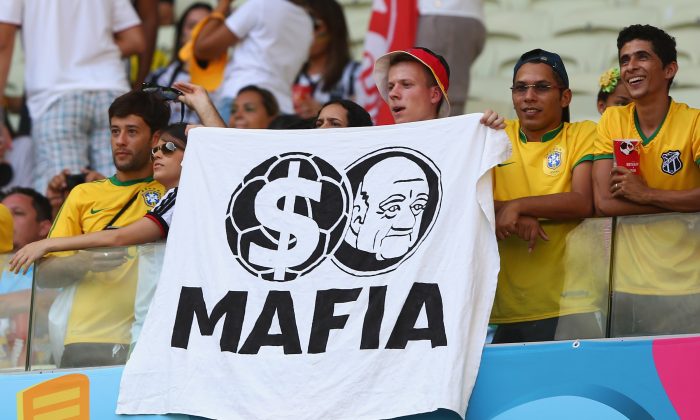 A fan holds up a protest banner during the 2014 FIFA World Cup Brazil match between Germany and Ghana in Fortaleza, Brazil, on June 21, 2014. (Martin Rose/Getty Images)
Opinion

Soccer Is Democratic. The World Cup Is Oligarchy

It’s the biggest sporting event in the world. Fans from virtually every place on Earth don jerseys, scarves, and caps and head to the nearest bar to chug an ice-cold beer while passionately yelling and cheering their team on—hopefully to victory.

The World Cup happens only every four years, and for most of us, there’s nothing like it.

In a test of stamina, national pride, and strength, 32 teams representing 32 different countries have descended upon Brazil. The first match, between host country Brazil and Croatia, took place at Arena Corinthians in São Paulo. The crowd there was lively, energized by a type of spirit that can only be felt at the World Cup.

What all those revelers and die-hard soccer fans may not have realized is that the very city that hosted the iconic opening match was one of the most affected by forced evictions, with thousands of poor residents shunted aside to make way for stadiums that may never be used again. These evictions in São Paulo and across the country have left thousands of people homeless; the compensation for losing your home is a pittance that doesn’t begin to cover the cost of housing in a country where real estate prices are skyrocketing.

“World Cup For Whom?” reads a sign painted on the street in São Paulo.

After all, if their government could spend billions on shiny new stadiums and brand new infrastructure to accommodate the influx of foreign visitors, surely it could spring for a few dollars for some development projects for its poorest citizens.

Unfortunately for Brazilians, that doesn’t seem to be the case.

In 2008, a year after Brazil first won the right to host the 2014 World Cup, 79 percent of Brazilians were in favor of their nation being the host. Brazil’s national team is a five-time World Cup champion, more than any other country, and has produced several legendary futbolistas. So it’s no surprise that Brazilians were initially excited to host the games.

Six years later, however, that number has fallen to a dismal 48 percent, a shift reflected in the number of Brazilians participating in protests.

In May alone, 12 Brazilian cities were rocked by anti-World Cup protests. In Rio, demonstrators coordinated with workers on strike, claiming that the money spent rehabilitating the Maracanã stadium could pay for 200 schools. In Belo Horizonte, 2,000 protesters swarmed the streets. In the capital city of Brasilia, demonstrators carried banners that denounced the deaths of stadium workers.

As the games began, protests showed no signs of winding down. Demonstrators and police clashed in the streets of Rio on June 15, three days into the World Cup. In one instance, police responded to a protest with tear gas—but ended up accidentally gassing tourists. Also in Rio, The Associated Press released a video of an officer shooting live rounds into a crowd of protesters.

Other Brazilians have chosen to express their discontent by painting anti-World Cup murals in the streets. Some of them depict hungry children with nothing to eat but soccer balls. Some of them pay homage to the largely indigenous communities that were evicted from their homes.

And some of them are harsh but succinct: “[Expletive] the World Cup.”

Echoing the Sochi Olympics, which came under fire for exorbitant costs and haphazard facilities, this World Cup will be the most expensive in history—and calling Brazil unprepared is putting it lightly.

As of April, Brazil had spent $7 billion repairing stadiums and refurbishing hotels, a figure that is believed to have swelled to upward of $11 billion since. Despite this being three times the original budget, many of the projects are still not completed—even though the games have already started.

One day before kick-off, the Amazonia stadium still wasn’t completed. The stadium is located in the middle of the Amazon and is difficult to get to by road. Once the World Cup is over, the teams that will call the stadium home will almost certainly struggle to fill its seats, making the $300 million spent on its construction a total waste.

And of course, it’s not just Brazil.

Awash with scandal, corruption, and bribery, FIFA’s popularity is plunging. Even though the 2022 World Cup is a full eight years away, human rights activists and soccer fans alike are already calling on FIFA to take the World Cup away from Qatar.

The charges that Qatar won host-nation status because FIFA officials were bribed are indeed terrible, but the human rights situation there is even worse. Human rights groups have called foul over Qatar’s treatment of the migrant workers building the infrastructure for the Cup. Allegations include meager pay, unsanitary living conditions, and passport theft. Worst of all, 400 people have died constructing stadiums—a number that could reach 4,000 if immediate action isn’t taken.

International mega events and controversy seem to be synonymous as of late, and it doesn’t help that Rio de Janeiro is set to host the 2016 Summer Olympics. Protests over those games have already coincided with World Cup demonstrations.

Russia, still recovering from the negative press surrounding the 2014 Sochi Olympics, won the rights to host the 2018 World Cup. More backlash is inevitable.

Soccer is a democratic sport. Anyone anywhere can pick up a ball, kick it around, and learn to play. But what’s happening in Brazil is not representative of that sentiment. The Brazilian government has trampled over the rights of its own people, not in the name of soccer but in the name of money and prestige.

As protests sweep the nation, soccer fans face a predicament. We love soccer and want to watch our favorite players shine—but not at the expense of millions of disadvantaged Brazilians.

Nathalie Baptiste is a Haitian-American contributor to Foreign Policy In Focus who lives in the Washington, D.C., area. She holds a Bachelor of Arts and Master of Arts in International Studies and writes about Latin America and the Caribbean. You can follow her on Twitter at @nhbaptiste. This article previously published at fpif.org.