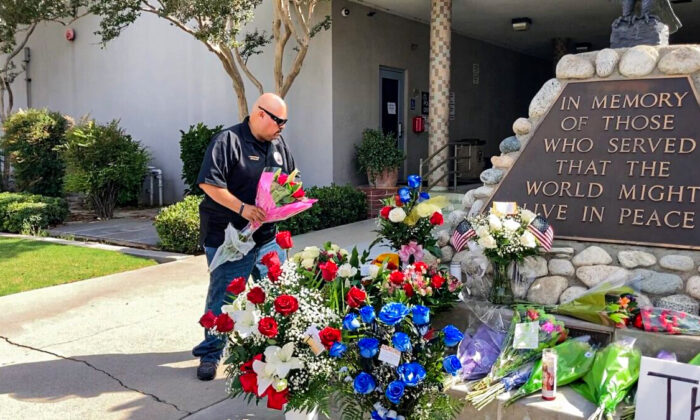 EL MONTE, Calif.—Local officials and community members are mourning two El Monte officers killed in the line of duty at a June 14 motel shooting with flowers, candles, prayers, and messages of support.

“We’re devastated. All we can do right now is offer support to the victims’ families,” Mayor of El Monte Jessica Ancona told NTD Television on the morning of June 15. “One thing I do want to make sure that I point out is I thank all the neighboring cities who sent their law enforcement officers … to honor our fallen officers.”

The shooting, which also left the suspect dead, occurred about 5:10 p.m. on Tuesday at the Siesta Inn at 10327 Garvey Avenue, near the San Bernardino (10) Freeway when the two officers were responding to a stabbing report, according to the Los Angeles County Sheriff’s Department, which was assisting El Monte police with the investigation.

The two officers were identified on Wednesday afternoon as Corporal Michael Paredes and Officer Joseph Santana by the Los Angeles County coroner’s office and the City of El Monte. Both were raised in the city and had a strong connection with the community they serve, city officials said in a statement.

“These two officers are our gentlemen that grew up in our city and have family here. They’re deeply rooted in our city. It’s such a huge loss to our city,” Ancona said.

The neighboring cities including Azusa, Baldwin Park, Alhambra, and West Covina have sent police officers and dispatchers to cover shifts for El Monte officers to give them time to escort their slain colleagues to the coroner’s office after the incident, according to Ancona.

Jimmy Tessier, a custodian at the El Monte City School District, said a prayer for the two fallen officers in front of the memorial plaque Wednesday morning.

“This is not common around here,” he told NTD Television. “It was like kind of chilling because we thought that will never happen … you know, [for] any police [to] get gunned down like that.”

El Monte City Councilwoman Maria Morales posted on Facebook, “They went to work today to protect the people of our city and to answer the call for help. Sadly, their selfless acts of service led them to a place of evil and they were taken from us in a senseless act of cowardice.

“As a city official and, more importantly, as a mother, I can only imagine the pain and suffering their families are now enduring. I want them to know that I and the people of El Monte grieve with them during this dark moment.”

Law enforcement agencies across Southern California have expressed their condolences to the slain officers’ families and colleagues.

“My deepest condolences and prayers go out to the El Monte Police Department and the loved ones of the two officers who were senselessly murdered this evening in the line of duty. I thank you for your dedicated service to the community,” Alex Villanueva, the Los Angeles County Sheriff, wrote on Twitter.

District Attorney George Gascón wrote on Twitter immediately following the incident: “We know that you will be grieving for a long time, and that no words will ease your suffering. As a former Los Angeles police officer, I know firsthand the dangers faced daily by law enforcement and the sacrifices made by their family members.”

However, some blamed the incident on Gascón’s “soft-on-crime” criminal justice system reforms as other local media reported that the suspect was identified as Justin William Flores, 35, who was on probation for possessing a firearm as a felon.

“Your condolences won’t bring back the lives you’re responsible for losing, nor will your condolences cover the payout these families will surely get from the County of LA,” a Twitter user responded to Gascón’s statement.

Paredes begin his law enforcement career as a cadet in the El Monte Police Department, and he was sworn in later as a full-time police officer in 2000. He is survived by his wife, daughter, and son.

Santana served three years as a deputy with San Bernardino County Sheriff’s Department before he came back to serve his hometown. He had only been patrolling in El Monte for less than a year. He is survived by his wife, daughter, and twin boys.

Annie Wang of NTD Television contributed to this report.