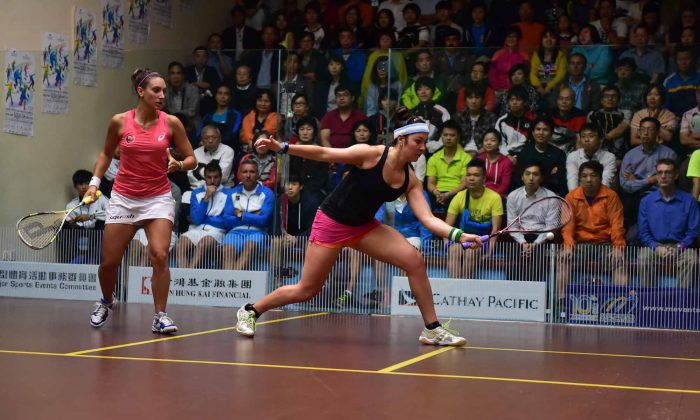 HONG KONG—American No.1 women’s squash player, Harvard College Student, Amanda Sobhy reached the Semi-final of the Cathay Pacific Sun Hung Kai Financial Hong Kong Squash Open 2014 on Friday Aug 29, 2014. Sobhy, un-seeded in the tournament beat the World No. 5, Camille Serme of France (Seeded 3) in the Quarter Final of the tournament to progress to the Semi-final to be played on Saturday Aug 30.

In the Semi Sobhy will meet the World No. 1 Nicol David who had an easy 11-8, 11-4, 11-3 victory over Hong Kong’s Joey Chan in the Quarter Final. Chan put up a good fight in the first game but David’s speed, skill and experience were too much for the Hong Kong star.

Going for her 9th successive Hong Kong title David is well on track to achieve this milestone.  The Semi-final against David, Sobhy is expected to find this a difficult match but whichever way the result goes it will be an important learning experience for the American player who is still balancing study with top squash.

In the lower half of the Women’s draw un-seeded Egyptian Nour El Tayeb outplayed the No. 4 seeded Alison Waters of England Seeded 4 and Laura Massaro the World No. 2 just edged Rachael Grinham (ex-World Open Champion) of Australia an exciting 5-game match. The final game was very tense Grinham looked on course for an upset but Massaro pulled the score back to 9-9 and then won the next 2-points to take the game 11-9.

In the Men’s competition the Semi-final matches are between No. 1 Seed Gregory Gaultier of France and Tarek Momen of Egypt; and Borja Golan of Spain (last year’s finalist) and the No. 2 Seed Mohamed Elshorbagy of Egypt who is fresh from a win in the Malaysian Open last week.