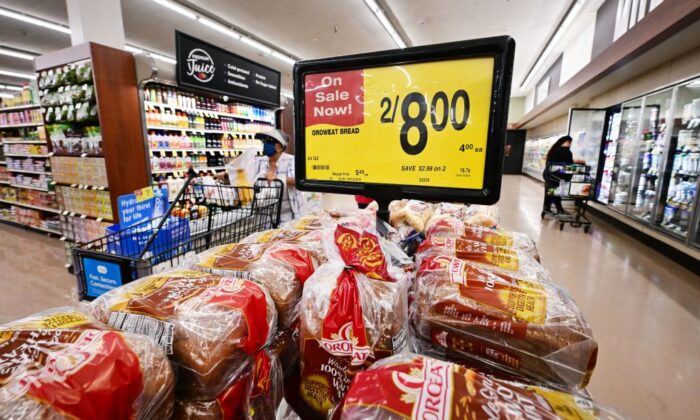 People shop at a supermarket in Montebello, Calif., on Aug. 23, 2022. US shoppers are facing increasingly high prices on everyday goods and services as inflation continues to surge with high prices for groceries, gasoline, and housing. (Photo by Frederic J. BROWN / AFP)
Inflation

Rising prices are eating into the earnings of Americans, with inflation outpacing wages for the seventeenth month in a row in August during the Biden administration.

The 12-month Consumer Price index (CPI), which measures inflation over a one-year period, came in at 8.3 percent in August, according to data from the U.S. Bureau of Labor Statistics. Since the beginning of the year, annual inflation has never dropped below 7.5 percent. This elevated inflation rate is reducing the purchasing power of citizens.

According to Jacki Kotkiewicz, director of Policy Research at the Republican Party’s RNC Research, August is the seventeenth consecutive month that real wages have fallen during the Biden administration .

On a yearly basis, grocery prices have risen every single month in 2022. The largest increase was in August, at 13.5 percent. This is the biggest such jump in 43 years for the month, Kotkiewicz pointed out in another tweet.

According to Justin Wolfers, an economics professor at the University of Michigan College of Literature, Science, and the Arts, he thought that although headline inflation will come down, there is no “quick path” to bringing it down to the Federal Reserve’s targeted inflation rate of 2 percent.

“I expect that over the next year or so inflation will come down to rates of two or three-point-something. It’ll become less of a concern for the general public—it’s hard to tell the difference between 2 percent and 3 percent inflation—but this will remain a central concern for the Fed,” he wrote in a tweet on Sept. 13.

A survey by Bankrate found that, in the past year, only 33 percent of employees have seen their income either keep up or exceed rising household expenses due to inflation. For 55 percent of respondents, their incomes have not kept up.

“Inflation that has run at the highest levels in more than four decades has stripped buying power away from households of all walks of life,” said Greg McBride, CFA, Bankrate chief financial analyst, according to a Sept. 14 article detailing the results of the survey.

“Even half of those receiving a pay raise, getting a promotion, or taking on new responsibilities said that higher pay falls short of the increase in household expenses.”

According to a survey by WorldatWork, mean salary increase budgets in the United States for 2023 is expected to be at 4.1 percent, which is only half of the inflation rate of 8.3 percent in August.