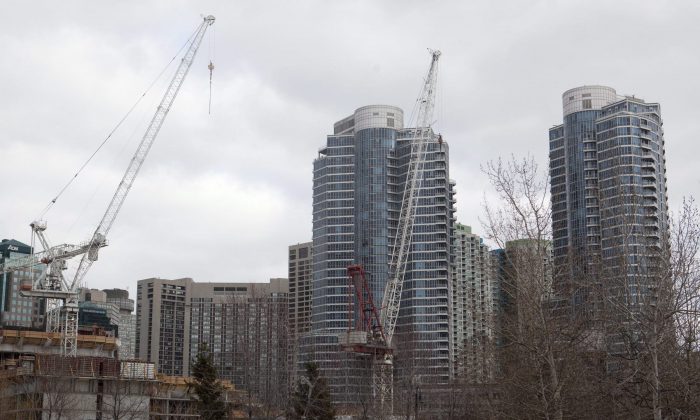 Construction cranes stand in front of condominiums in downtown Toronto, Feb. 4, 2012. A growing contingent of Canadian families are opting for the compact condo lifestyle as space runs out in Canada's biggest cities and housing prices remain out of reach for many. (The Canadian Press/Pawel Dwulit)
Canada

TORONTO—Janis Isaman makes no apologies for raising her 6-year-old son in a two-bedroom condominium—and for eschewing the once-coveted trappings of a life in the suburbs.

“I definitely do not want a yard and I do not want anything to do with the suburban lifestyle,” says Isaman, 40, a business owner and single mother in Calgary.

The variety of urban life suits Isaman and her son, she says. They can walk to their favourite tea shops, restaurants, and the local library. And the time that would otherwise be taken up cutting grass and raking leaves can instead be spent exploring the city together.

“We have a way more abundant lifestyle because I’m not shovelling the walk, I’m not taking care of the yard.”

Isaman is part of a growing contingent of Canadian families opting for the compact condo lifestyle over the white picket fence and the sprawling suburban McMansion as space runs out in Canada’s biggest cities and housing prices remain out of reach for many.

The latest tranche of census numbers doesn’t delve into the specific phenomenon of condo ownership or house prices; that’s for a later release scheduled for October. But it does illustrate a waning appetite for single-family dwellings among the millions of Canadians living in the country’s largest cities, many of whom are favouring the highrise life.

We’re learning that more families are deciding to live in condos, due to affordability constraints and lifestyle decisions.
— Shaun Hildebrand, Urbanation

Toronto and its ever-morphing Tetris skyline has the highest share of dwellings—nearly 30 percent—in buildings of five or more storeys, Statistics Canada reports, followed by London, Ont., at 16.8 percent, and Vancouver at 16.7 percent.

In 10 of Canada’s 35 so-called “census metropolitan areas,” “single-detached houses represented less than half of occupied private dwellings in 2016,” the agency reported, including in Vancouver.

But it will take a shift in mindset for Canadians to embrace high-density living, says Isaman. When her son was younger, she encountered a lot of pushback for raising a child in an apartment.

“It’s seen as a really big societal norm in Canada that you move to a house when you have a child,” she says. “I had to resist societal pressures that what I was doing was wrong. It seems weird to people because they think that kids need yards.”

There are a number of factors driving the condo craze, says Shaun Hildebrand of Urbanation, a Toronto-based condo research firm.

Part of it is rooted in necessity. Soaring prices for detached homes and tightened mortgage rules have caused much of the pent-up housing demand in the Greater Toronto Area to shift into the condo market.

“The result is that a greater proportion of households are now living in apartments compared to 10 years ago,” Hildebrand says.

And while much of the past demand for condos was from first-time buyers looking to dip their toes into the market, today that is not necessarily the case.

“Anecdotally, we’re learning that more families are deciding to live in condos, due to affordability constraints and lifestyle decisions.”

That has caused a shift in the kinds of units that developers are building, reversing a decades-long trend of increasingly tiny units.

Babak Eslahjou, a partner at Core Architects, says that over the past 20 or so years, the square footage of condos has been shrinking, with developers squeezing more bedrooms into less space. The living and dining areas have been combined into one, producing a generation of condo-dwellers who eat and live on the couch.

But now, that trend is beginning to shift.

It isn’t just young families making the shift to compact living, either: retirees are also downsizing, citing travel plans and the desire for less housework as motivating factors.

It’s been nearly a decade since Roz and Bob Holden traded their 3,500 square-foot house—complete with four bedrooms, a library and a tree-filled yard—for a two-bedroom condo, and the Toronto residents say they have no regrets.

“This is a much smaller space but it’s all we need,” says Bob. “We’re very comfortable here. We don’t feel squeezed in any way.”