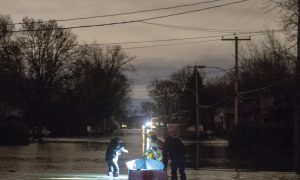 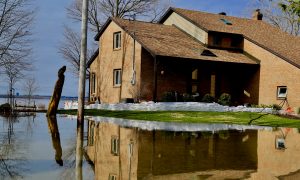 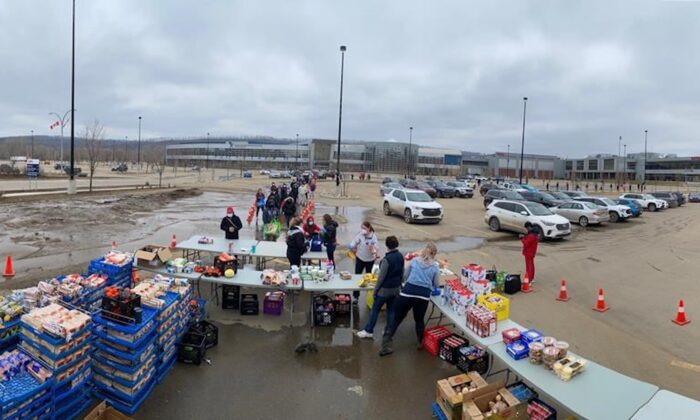 Photo shows the donated food in Fort McMurray after the flood. The Regional Municipality of Wood Buffalo lifted a mandatory evacuation order for five parts of the city late Friday, May 1, 2020, citing receding water levels. An ice jam earlier this week on the Athabasca River led to the flooding of the city’s downtown, forcing close to 13,000 people out of their homes. (The Canadian Press)
Canada

FORT MCMURRAY, Alta.—When Norm Sutton was allowed to return to his home in Fort McMurray, he could see that his wife’s car had been totally submerged and floodwater had completely filled his finished basement, soaking everything right up to the ceiling.

The water is gone now, but it’s left a deep layer of mud in the basement and has soaked the drywall. The family issued a plea on social media for volunteers to come on Sunday to form a chain to pass debris up the stairs to a dumpster, but they warned the work will be wet and that anyone who comes to help should bring rubber boots.

“The furniture, the library, I’ve got over a thousand books downstairs. Everything was destroyed. My wife’s sewing room, her sewing machines, the fabric collection, the beds, my record collection, the stereo, everything is totally destroyed,” Sutton said in a phone interview Saturday.

“But we were luckier than quite a few of my neighbors in that it did not reach the main floor of the house.”

The Regional Municipality of Wood Buffalo lifted a mandatory evacuation order for five parts of the city late Friday, citing receding water levels. An ice jam earlier this week on the Athabasca River led to the flooding of the city’s downtown, forcing close to 13,000 people out of their homes.

When Fort McMurray residents returned home following a wildfire that forced the entire city to flee in 2016, they hoped that their homes had escaped the flames and were still standing.

This time, the homes are still there, but some aren’t inhabitable because of the water damage, at least in the immediate future.

One downtown supermarket that was forced to close—but escaped the flooding—was able to help lift the spirits of returning evacuees on Saturday with free food.

Dan Edwards, executive director of the Wood Buffalo Food Bank Association, said Superstore contacted the group and told them that their coolers had continued to run during the evacuation and they had a lot of produce they wanted to donate.

The food bank’s building is damaged from the flooding so they couldn’t distribute it there, but Edwards said they called in some volunteers and set up a temporary distribution point.

“It’s beautiful. It’s like produce I would buy myself. You get the odd bad apple, but that’s like when you’d go to the store anyways,” Edwards said.

“It is amazing product. It is stuff they could have sold had they been open.”

The municipality said Saturday that electricity and natural gas service has not been restored to the flood-affected areas yet, but crews were working to restore it as quickly as possible. A boil-water advisory for the city and surrounding region also remained in effect.

It said that Canadians wishing to make a donation are encouraged to contribute to the Fort McMurray & Area Floods Fund online at www.redcross.ca.

Edwards noted that despite the strain that many people are facing, the ones who stood in line for the free produce took the time to ask how he and the volunteers were doing.

“Literally every single person I talk to, they say, thank you. I’ve had people asking me what I need as I’m walking down the lineup,” Edwards said, noting a lot of the people won’t be covered by insurance.

“We’re only just beginning this phase, and it’s going to be a while before things are whole again.”

On Friday, Environment Minister Jason Nixon said a 44-kilometer-long icy mass on the Peace River could mean another 6,000 people in the region might need support from the province.

About 750 people have left their homes on the Little Red River Cree Nation, which declared a state of local emergency last Monday.