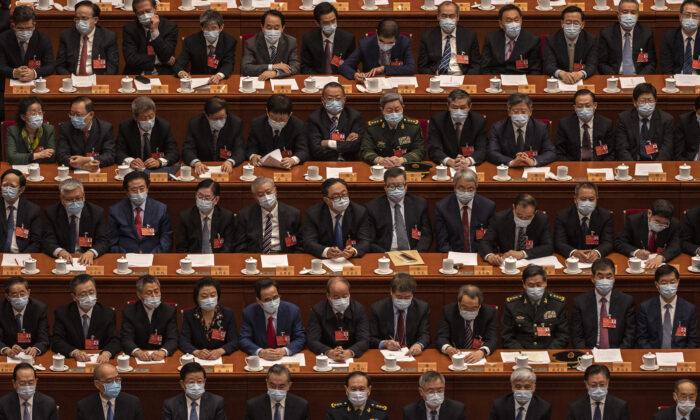 Delegates participate in the closing session of the Chinese People's Political Consultative Conference (CPPCC) at the Great Hall of the People in Beijing, China, on March 10, 2022. (Kevin Frayer/Getty Images)
Thinking About China

So Many Lies From the CCP

When asked about the lessons of the Russian invasion, China’s Ministry of Defense put out a bold statement filled with lies that need to be refuted before they gain currency.

The Chinese Communist Party (CCP) is extremely good at manipulating language, using spin, and inducing Western guilt. Its latest attempt is a March 24 statement by Col. Wu Qian speaking for the Ministry of Defense, which includes so much spin in so little time that I need to go line by line.

The example in question is from Western reporters who asked about the lessons learned from the Russian invasion of Ukraine:

“First, if China follows Russia’s example and launches a war against its neighbors, the international community will face tougher sanctions. If an unprovoked attack occurs in the Pacific region, the countries in the region will unite to resist. Third, it will be difficult for China to launch a war against its neighbors due to terrain factors. Any comments on this, please?”

The answer is stunning for its deception and tortured logic:

“As we all know, China has always pursued a defensive national defense policy and a military strategy of active defense, upheld the diplomatic concept of amity, sincerity, mutual benefit, and inclusiveness, and committed to building a community with a shared future for its neighbors. Since the founding of New China, we have never invaded other countries, never engaged in proxy wars, never sought spheres of influence, and never participated in military group confrontations.

On the issue of peace and security, the United States itself has a bad track record. Since the founding of the country, the United States has frequently provoked wars overseas, exported turmoil on a global scale, and caused serious humanitarian disasters.”

The problem is, as Luke Skywalker once said, everything in that statement is wrong. Here’s why:

The first problem is that “active defense” in reality means the Chinese regime pursues preemptive attacks. I don’t know any neighboring countries that even want to invade mainland China, which undermines their strictly defensive claims. Beijing claims contested islands in the East and South China seas and wants to adjust land borders such as the one with India.

The geography of contested locations suggests a strong China flexing its muscles and expanding—not one willing to retreat into the interior to buy time for a decisive counterattack. This becomes even more apparent when considering the CCP’s strategic signature since taking power. All of this means that we should interpret the regime’s “active defense” as a preemptive attack.

This claim is laughable because the Chinese regime has aggressive relationships with every one of its neighbors. Both Vietnam and the Philippines had active policies that opposed the United States. But Chinese policies are so aggressive that some neighboring countries moved closer to the United States. Australia might be the prototypical example that undermines this claim.

The Australian turn toward the United States and greater defense spending has been building since 2018. A combination of Chinese interference in Australian elections, the latter’s support for democracy activists in Hong Kong, and Canberra calling for an independent investigation into the origins of COVID-19 (and the implied allegation of the Wuhan lab leak theory) led to Chinese retaliation.

But this started a tit-for-tat between the two powers. Australia increased its defense budget, and the CCP turned up the volume on supposedly racist Australian attacks or sent warships near Australia. This led to the announcement that Australia would purchase and use nuclear submarines in a new alliance with the United States and the United Kingdom, but this was years in the making. This is the first time the United States has shared its nuclear submarine technology in 50 years. Some analysts say it is the most important military partnership in the region since World War II.

This is a subtle attack against supposed American warmongering (see below) but uses invented history. Since most Chinese invasions were over disputed territory, they could technically bend the truth and claim they were only settling an internal matter. This is the argument that CCP officials often make regarding Taiwan.

The Chinese regime has fought offensive preemptive wars with its neighbors. In 1950, when many analysts believed China needed years of recovery, CCP leader Mao Zedong launched an attack on American forces in Korea near the Chinese border.

A few years later, the communists seized several islands controlled by Taiwan, and Mao signaled his intention to take the rest of the island’s territory. Only the timely intervention of American forces prevented that action. (Of course, the CCP labeled that American intervention to stop an invasion as an “aggressive escalation.”)

The CCP wanted to address the unequal treaties regarding Indian territory in 1962 and Outer Mongolian territory in the Ussuri River skirmish with the Soviet Union in 1969. And it fought an inconclusive border war with Vietnam in 1979 that started with a preemptive seizure of disputed territory.

Some conflicts were longer and more official, but they followed a pattern where the communists would preemptively seize contested territory, defend it against counterattack, and negotiate while holding on to the territory it seized.

This is a blatant lie. China aided the communist Vietnamese forces against America during the Vietnam War.

The CCP tried to deny responsibility for the Korean War by making defeated nationalists lead the attack and labeling them “volunteers.” This was very much a proxy war.

This one might technically be true but is mostly word games. A cursory study of history finds that a new dynasty like the Han, Tang, and Song would try to assert its strength in several areas: Korea, Vietnam, and expanding its power over the steppe peoples.

Unsurprisingly, when the CCP gained power in 1949, it reasserted its authority over those territories. It did so under the guise of adjusting unequal treaties by Western colonialist powers, but the fundamental desire to reassert control over key territories remained the same.

The US ‘Has a Bad Track Record’

This final point pivots from covering up Chinese crimes to highlighting supposed American misdeeds. This is a frequent practice of the CCP because Westerners are so good at complaining about their racist, warmongering, imperialist past.

Without getting into the historical weeds regarding Western and American misdeeds, America can recognize its imperfect pact while retaining moral clarity against the genocide of the Uyghurs and any aggression from the communist regime.

It might seem like a losing effort to combat CCP statements line by line. But misinformation—repeated long enough—has a way of becoming an accepted fact. Americans might think of many political points that become articles of faith. For example, the repeated talking points about police brutality against black people caused the public to overestimate the number of victims by almost a thousand times.

In the case of Chinese aggression, the CCP’s repeated talking points might undermine the Western will to resist its naked aggression at a time when it is needed most.