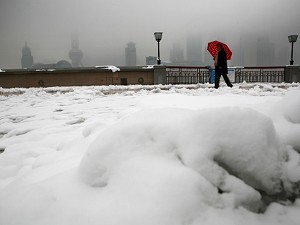 Fierce snowstorms continue to rage across Central China, with a blackout in the Miao and Dong Autonomous Prefecture in Guizhou Province leaving four million people without power.

Those with Internet access have urged the international community to assist, saying cities have become completely isolated, and prices have gone through the roof. Some villages haven’t been heard from for half a month.

A message written on the Internet talked of extreme cold, without heating equipment or support from the government.

“Now it is minus 6 degree with continued rain and snow,” the message said. “No power and no support with extreme weather which is a fatal blow to people. It seems that we have been forgotten.”

Other Internet users attacked government ministries and the state media for whitewashing the disaster.

Some Internet users also complained that state media network CCTV didn’t even report on the snowstorms until the 26th of January, and those reports contained no useful information, only mentioning how leading cadres rushed to the front line to relieve disaster victims.

“The central leadership makes decisions according to these reports, and this will delay rescuing victims. What is even more chilling to us is that some major TV stations continue to report nothing but the Olympics,” wrote one Internet poster.

“Our government officials are always keen on whitewashing bad news not conducive to the regime.”