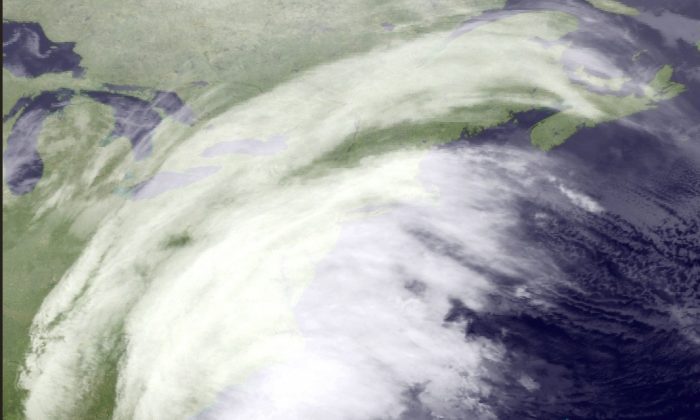 This satellite image taken around 12:12 a.m. EDT and released by the National Oceanic and Atmospheric Administration, shows clouds around the Northeast of the United States on March 14, 2017. (NOAA via AP)
New York

Snowstorm Clobbers the Northeast After Weeks of Mild Weather

NEW YORK—A storm pounded the Northeast with more than a foot of snow in places Tuesday, paralyzing much of the Washington-to-Boston corridor after a remarkably mild February had lulled people into thinking the worst of winter was over.

The powerful nor’easter grounded more than 5,000 flights, closed schools in cities big and small and prompted dire warnings to stay off the roads. Nearly 100,000 customers from Virginia to Pennsylvania lost power.

“The winters seem to be upside down now. January and February are nice and then March and April seem to be more wintry than they were in the past,” said Bob Clifford, who ventured out on an early morning grocery run for his family in Altamont, near Albany, New York, where 5 inches of snow had fallen by daybreak.

The storm was expected to unload 12 to 18 inches of snow on the New York City area with wind gusts up to 55 mph. It tracked a little farther west than forecasters originally anticipated, resulting in a sloppy mix of snow and sleet for larger portions of Pennsylvania and New Jersey.

The National Weather Service’s office near Philadelphia called the storm “life-threatening” and warned people to “shelter in place.” Coastal flood warnings were in effect from Massachusetts to Delaware.

The flight cancellations included more than 2,800 in the New York City area alone, where about 200 passengers were stranded at Kennedy Airport. Amtrak canceled or modified service up and down the Northeast Corridor. And the above-ground portions of the New York subway system were being shut down.

In the nation’s capital, the federal government announced a three-hour delayed arrival for non-emergency employees, with an option to take the day off or telecommute. Emergency employees were told to report on time unless otherwise directed.

In Massachusetts, where the forecast called for 12 to 18 inches of snow, Gov. Charlie Baker encouraged motorists to stay off the roads and to take public transit only if absolutely necessary, saying the fast snowfall rates will driving hazardous.

The nor’easter comes a week after the region saw temperatures climb into the 60s, and less than a week before the official start of spring.

Maryland Gov. Larry Hogan urged people not to be lulled into a false sense of security because of the mild winter.

“This is a serious winter storm,” he said, adding that parts of the state could see over a foot of snow. “It’s obviously going to be the biggest event we’ve had this season and people need to be prepared. They need to be safe.”

President Donald Trump tweeted a photo of his Monday evening meeting with Washington Mayor Muriel Bowser and the chief of the city’s transit system to discuss storm preparations.

The heaviest snowfall was expected Tuesday morning through the afternoon, with as much as 2 to 4 inches per hour.

Pennsylvania Gov. Tom Wolf said about 700 National Guard members would be deployed along with more than 2,000 snowplows to keep up with the storm.

The snow threat led college basketball teams to alter their March Madness travel plans. Villanova, top overall seed in the men’s NCAA Tournament, left Philadelphia on Monday afternoon for Buffalo, New York, to get ahead of the storm.

But teams in the men’s and women’s tournaments rely on chartered flights, so any backlog at commercial airlines shouldn’t be a problem.