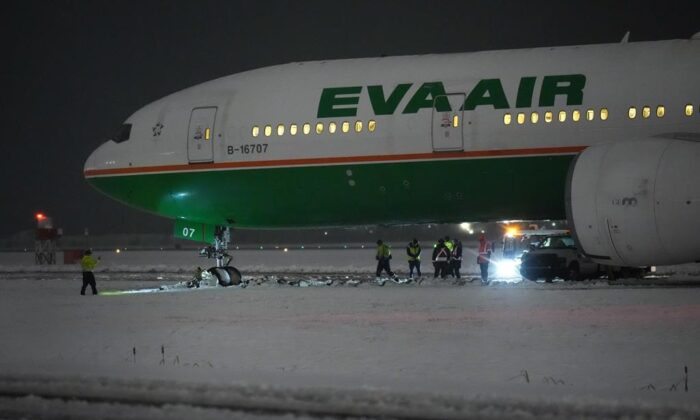 Workers are seen around an EVA Air Boeing 777 aircraft that went off a taxiway onto soft ground after landing at Vancouver International Airport from Taipei during a snowstorm on Nov. 30, 2022. (The Canadian Press/Darryl Dyck)
By The Canadian Press

When Bharanisai Madhusudhan stopped at the grocery store on his way home from work Tuesday afternoon, he expected the trip home to Surrey, B.C. to take him about 45 minutes.

Instead, it would be nearly 12 hours before he arrived home.

“If I had walked to my home, I would have reached there about four hours earlier,” he said.

Madhusudhan was among a gridlock of drivers trapped in their vehicles as a fierce storm blanketed much of British Columbia’s south coast and Vancouver Island with up to 25 centimetres of snow, causing traffic chaos, power outages and airport delays.

Several crashes blocked the Alex Fraser Bridge, one of the main arteries over the Fraser River. The route was closed for hours in both directions over safety concerns, the government said.

Madhusudhan said he could see the bridge from his spot in the traffic jam, but there was no way for him to turn around.

He said he saw drivers travelling with infants and spoke to one senior who was worried about running out of his medication. Abandoned vehicles on the side of the road suggested some people had decided to leave their cars and walk.

The frustration from drivers was palpable, he said.

“Actually, it was scary because the last thing you want to do is get stranded on the top of a bridge and just wait for a towing vehicle, which was also not possible because a lot of towing vehicles were stranded as well,” he said.

Janelle Staite, regional deputy director of the province’s highway services, said Wednesday winds between 30 and 40 kilometres an hour prompted their decision to close the bridge.

“Any closure that we do is always weighted with a great degree of vigour to make sure that the causes and impacts and delays to travellers are considered,” she said.

“But ultimately safety is that No. 1 priority and that is the strongest consideration that we have.”

Staite said 30 pieces of equipment were deployed in the Lower Mainland to deal with the snowfall.

“What we found yesterday is around 1 or 2 o’clock, when people saw the snow starting to fly, they actually started leaving their work or changing their routines a little bit. So the congestion period that we typically see around 4:30, started at 2 p.m.,” she said.

She said they weren’t able to clear the traffic congestion until early Wednesday morning, “which did contribute to some very extraordinary commutes for folks.”

Staite said officials will review what happened to see if anything needs change ahead of the next snowfall expected on Friday. That includes making sure that resources are deployed to the right areas at the right time.

Madhusudhan said the government could have done a better job preparing for the storm that it knew was coming and of notifying people when the bridge was being shut down.

Environment Canada lifted snowfall warnings Wednesday for Vancouver Island and Metro Vancouver but was predicting up to 10 centimetres more over the Fraser Valley and along the Sea-to-Sky corridor between Squamish and Whistler.

Snowfall warnings for parts of southeastern B.C. remained with another 15 centimetres forecast, and wind or arctic outflow conditions were also posted for the north and central coasts.

By Wednesday afternoon, BC Hydro said it had restored power to most of the 93,000 customers who had their power knocked out by the storm.

Officials at Vancouver International Airport said the EVA Air jet that skidded off a taxiway after landing late Tuesday had been removed within hours, allowing the north runway to reopen.

No one was injured and passengers were taken off the plane and shuttled to the terminal on buses after being stuck on board for about three hours.

Environment Canada data shows temperatures across the south coast were expected to dip below zero again by Wednesday night.