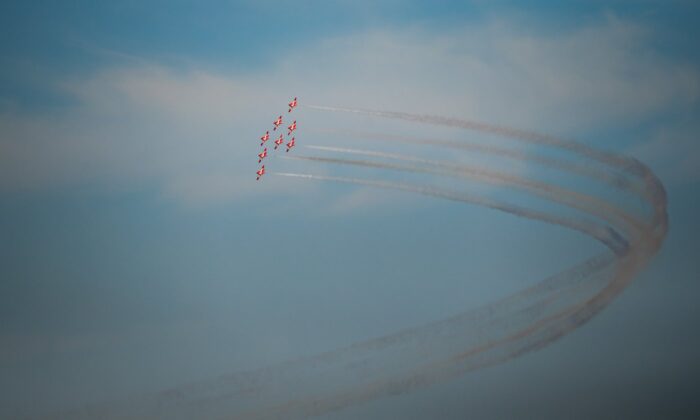 The Canadian Forces Snowbirds air demonstration team fly over English Bay as part of the Celebration of Light fireworks festival, in Vancouver, on July 27, 2022. (The Canadian Press/Darryl Dyck)
Canada

Snowbirds Squad Cancels Shows in Penticton and Abbotsford, BC, After Hard Landing

A malfunction that caused a Canadian Air Force Snowbirds pilot to make a hard landing after takeoff in northern British Columbia has forced the aerobatic team to cancel two performances in the province.

A statement on the Snowbirds’ social media page says the team has cancelled its Wednesday appearance at the Penticton Peach Festival and it will not take part in the Abbotsford International Airshow that will start on Friday.

The statement says the CT-114 Tutor jets will not be flown while a Royal Canadian Air Force flight safety team investigates what happened on Tuesday in Fort St. John.

The air force confirmed in an earlier tweet that the plane had been damaged but the pilot was not hurt.

An official with the Fort St. John International Airshow Society said the jet suffered a malfunction on takeoff but the pilot was able to return to the airport.

The hard landing resulted in a fire that was quickly handled by crews at North Peace Regional Airport and the airport said the runway was briefly closed for inspection.

The Snowbirds’ statement issued Wednesday does not say if any other performances will be scrubbed.

“Flight safety is paramount in the RCAF and investigations into incidents and accidents are done in a comprehensive and thorough manner following well-established procedures,” the statement says.

The nearly 60-year-old Tutor jets are scheduled to be used by the Snowbirds until 2030.

The planes were last grounded in late June as the air force dealt with a technical issue in a device that sets the timing for deploying a parachute during an ejection.

In May 2020, a Snowbirds jet collided with a bird shortly after takeoff from Kamloops, B.C., causing the engine to stall, and the crash killed Capt. Jennifer Casey, a public affairs officer.

The team was placed on an operational pause for the remainder of the summer following that accident, which came less than a year after another Snowbirds jet crashed in rural Georgia due to a fuel delivery system failure.

A report into the May 2020 crash in Kamloops determined the pilot and passenger’s ejection sequences were “outside the ejection envelope” and the plane was at such a low altitude their parachutes didn’t have time to work properly. The pilot, Capt. Richard MacDougall, suffered serious injuries, and Casey died at the scene.

A flight safety investigation of the Georgia crash found the pilot was able to eject and had only minor injuries, but reported “anomalies” with the ejection sequence and parachute opening. The plane was destroyed.

That investigation report said all life-support equipment was inspected and an inspection of the entire fleet’s engines was recommended.