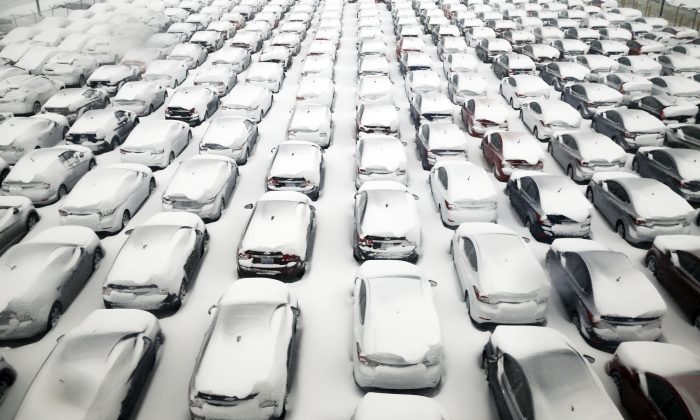 Cars are covered by snow in parking lot at O'Hare International Airport on Sunday, Feb. 1, 2015, in Chicago. The first major winter storm of the year is bearing down on the Chicago region, bringing with it blizzard conditions of heavy snow and strong winds. Numerous Chicago-area attractions are closed, more than 1,100 flights have been canceled at Chicago's airports and snow-covered roads are making travel treacherous. (AP Photo/Nam Y. Huh)
US News

Snow Turns to 70-Degree Weather in 48 Hours in Chicago, Breaking a Record

Earlier this week, snow fell in Chicago. But 48 hours later, temperatures rose to 70 degrees, effectively melting it all and giving residents quite a shock.

According to local station WGN on April 16, the strange weather broke a meteorological record. Since records started in the 19th century, “never before … has a 3-plus inch snowfall been followed by 70-plus degree temps 48 hours later.”

BREAKING: The WGN stat machine worked overtime on this one, but folks meteorological history has been made today in…

According to AccuWeather, Chicago saw the most mid-April snow in more than 50 years earlier this week.

As the clouds cleared over the Great Lakes this morning, #GOESEast saw some of the snow in Illinois, Wisconsin and Michigan slowly start to melt away. Learn more about how to tell snow and clouds apart in satellite imagery: https://t.co/LJSzGqKY3L pic.twitter.com/xHGX8I01c0

Enjoying #spring in #Chicago this morning…let it #snow #Naperville pic.twitter.com/Sgig40yIPu

The latest snowfall of the year in Chicago history occurred in June 1910.

“Temperatures are expected to climb back into the upper 40s and 50s Fahrenheit on Monday where it was snowing on Sunday,” AccuWeather Senior Meteorologist Kristina Pydynowski said on the website.

In the snowstorm earlier this week, temperatures were in the 30s with a wind chill in the 20s, ABC7 noted.

Temperatures in Chicago are now forecast to reach highs in the 60s and 50s in the coming week.

USA Today reported on April 16 that 100 million Americans are due to experience severe weather this week, including thunderstorms and tornadoes.

“We expect numerous thunderstorms to develop in the Plains, Midwest and South starting Wednesday, spreading eastward Thursday and Friday,” the Weather Channel said, according to the newspaper.

Multi-day threat of #severe thunderstorms begins Wednesday in the Plains and is expected to spread into parts of the South, Midwest and East: https://t.co/e2Canlzriz pic.twitter.com/SaKoaMiScj

Earlier this year, a cold-weather record was broken when temperatures hit minus 23 degrees at O’Hare International Airport in January.

It added that a cold record “was shattered in Chicago too as temperatures reached minus 23 degrees overnight at O’Hare International Airport. That broke the previous daily record of 15 degrees below zero, which was set on Jan. 31, 1966.”

The cold weather came amid the polar vortex that swept over the Central and Northeastern U.S. this year.