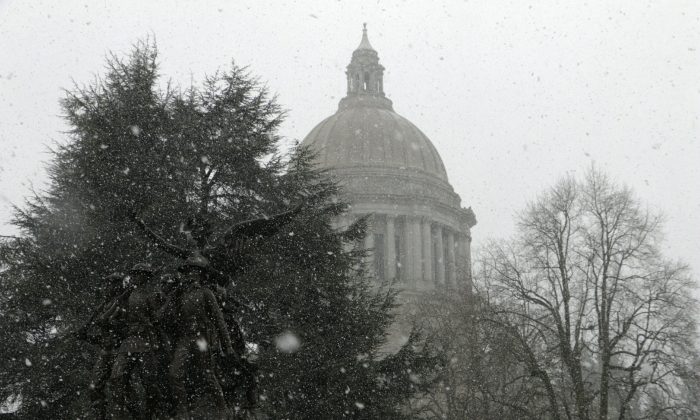 SEATTLE—A winter storm pounded Washington state on Friday, Feb. 8, forcing the cancellation of 200 flights in Seattle as officials worked to get people off the streets and into shelters during the nation’s latest bout with winter weather.

Snow began falling north of Seattle with some areas recording 8 inches of snow before it made its way south and enveloped the city.

Many businesses closed early so workers could get home.

Gov. Jay Inslee declared a state of emergency, saying everyone in the state should focus on staying safe.

“Forecasters predict this may be a storm unlike one we’ve seen in many years,” he said.

In California, more than 120 visitors and staff members were rescued after being snowbound in a Sierra Nevada resort for five days.

Crews had to travel by snowmobile to get to the lodge in mountains east of Fresno. Heavy equipment and crews then cleared more than 20 fallen trees and 8 miles of deep snow on the road leading to the lodge to allow guests and staff to leave the property Thursday night.

Another winter storm was on the way to the region.

In Yosemite National Park, as many as 50 housing structures near Half Dome Village were damaged by trees toppled during a snowstorm earlier this week, displacing more than 160 employees who provide food, lodging, and other services for visitors.

Eight feet?! That’s how much new snow fell in Tuolumne Meadows over a five-day period. “Needless to say that the Tuolumne Meadows rangers did not range far this week, but their shoveling and trail breaking muscles got a good workout.”
Read more: https://t.co/4eAPKqxIlO pic.twitter.com/PaaHrgKi35

Elsewhere, more than 148,000 customers were without electricity in Michigan following days of freezing rain. The Consumers Energy utility said power would be restored by late Sunday.

In Seattle, officials urged people to stay off the roads as traffic slowed to a standstill in some places because of the snow.

“Doesn’t matter where you’re going, expect it to take a very. long. time,” the Washington Department of Transportation said on Twitter.

In all seriousness, everyone PLEASE be cautious. This could be a really challenging stretch. If you must travel, take it slow & add lots of extra time. Our crews will be doing the best they can but roads may still be really slick. #wawx #SnowMageddon2019 pic.twitter.com/9YDFBDTCvf

Schools and colleges had canceled classes ahead of the storm expected to bring 6 to 8 inches of snow. Scores of flights were canceled or delayed at Seattle-Tacoma International Airport.

Snowfall from Sunday and Monday lingered into the week as below-freezing temperatures gripped the area. A 59-year-old man died Thursday from exposure at a Seattle light rail station.

Additional shelter space opened by city and county officials was filling up. The city was focused on people who are willing to come inside, Will Lemke, spokesman for the Seattle Human Services Department, told the Seattle Times.

“This is an extreme weather event, and offering shelter is the most important thing we can do right now,” he said.

Forecasters said Portland, Oregon, could get up to 4 inches of snow later in the day, with two more snowstorms expected to hit the city next week.

Residents in Portland and Seattle, two cities where rain is more common than snow in the winter, emptied grocery store shelves and waited in long lines to buy shovels and de-icer.

Autumn Sang was at a mobbed grocery store in Tualatin, Oregon, on Friday stocking up for the coming storm for herself and her neighbor, who is disabled and doesn’t have a car.

Sang said she had never seen the store so crowded. She grew up in southern Oregon, where snow is more common, and wasn’t fazed by the forecast.

“I love it. I’m excited about it,” she said of the snow. “I think that Portlanders, most of them are city people and they come from a lot of different places, so they’re not so used to it. It’s like, ‘Use your brain! If you don’t have to go out, don’t go out.’”