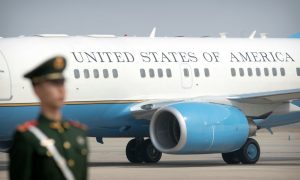 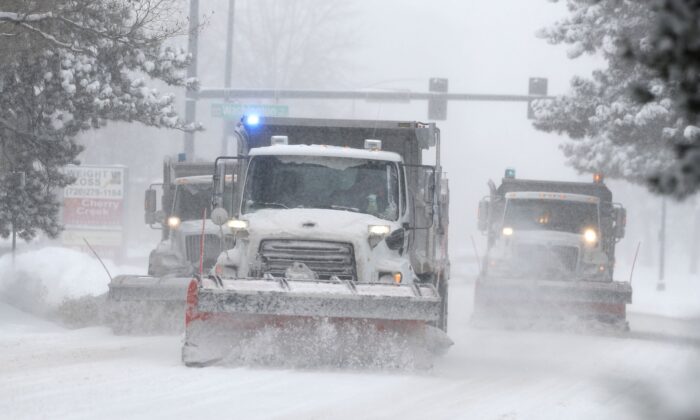 City of Denver snowplows clear the eastbound lanes of Speer Blvd. as a storm packing snow and high winds sweeps in over the region in Denver, Colo., on Nov. 26, 2019. (David Zalubowski/AP Photo)
US News

Snow Causes Travel Mayhem Across US Just Before Thanksgiving

DENVER—A storm dumping heavy snow buried highways in Colorado and Wyoming on Nov. 26, prompted school closures in Nebraska, and forced more than 1,000 travelers to sleep overnight in Denver’s airport after hundreds of flights were canceled as the busy Thanksgiving week travel period went into high gear.

That storm was heading toward South Dakota, Iowa, Michigan, Minnesota, and Wisconsin—and another storm in the Pacific Ocean was moving toward California, Oregon, and Nevada. Northern California and southern Oregon residents were bracing for the late Tuesday afternoon arrival of a “bomb cyclone” weather phenomenon that could create waves of up to 35 feet, wind gusts of up to 75 mph, and heavy snow in mountainous areas.

At Denver International Airport, about 7 inches was on the ground by Tuesday morning with more expected in the afternoon. Windy conditions reduced visibility, prompting the cancellation of about 30 percent of the airport’s average daily 1,600 flights.

About 1,100 people spent the night at the airport, including many cadets from the Air Force Academy near Colorado Springs who either missed flights or wanted to get to the airport before road conditions deteriorated, said airport spokeswoman Alex Renteria.

Among them was cadet Sadie Luhman, whose trip to the airport took three hours—twice the normal driving time. She got to the airport at 1 a.m., 10 hours before her scheduled flight to Chicago for Thanksgiving.

“I just wanted to beat the storm. We kind of left in the middle of it so it kind of didn’t work, but we got here,” she told KCNC-TV.

Airport workers handed out blankets, diapers, baby formula, toothbrushes, and toothpaste to the airline passengers who camped out for the night on floors and in chairs. Officials said they were hopeful that flight conditions would be back to normal by the afternoon.

Heavy snow in northern Colorado forced the closures of long stretches of Interstates 70 and 76. Parts of Interstate 80 in Wyoming were buried under snow drifts of up to 4 feet, officials said.

“We are mindful that this is a holiday travel week and we are working as fast and as quickly as possible to reopen the roads, and we will do that once the roads are safe for travelers,” said Wyoming Department of Transportation spokeswoman Aimee Inama.

Many government offices in the Denver area and in Cheyenne, Wyoming, closed along with colleges and schools not already on holiday break. In Nebraska, several school districts canceled classes Wednesday and the southwestern city of Sidney had received about 8 inches of snow. George Lapaseotes, the city’s airport manager, said he spent much of the morning clearing the runway in case it was needed for medical emergency flights.

Blizzard and wintry weather warnings extended into the Great Lakes states with the storm expected to bring high winds and snow to Michigan, Minnesota, and Wisconsin later Tuesday and a chance of snow over the weekend for parts of New England, said Alex Lamers, a National Weather Service meteorologist.

“That could be a coast-to-coast storm,” he said.

It also could mean disappointment for fans of the larger-than-life balloons flown at Macy’s Thanksgiving Day Parade in New York.

Organizers were preparing for the possibility that of grounding the iconic balloon characters because of 40-50 mph gusts in the forecast. Rules put in place after several people were injured by a balloon years ago require lower altitudes or full removal if sustained winds exceed 23 mph and gusts exceed 34 mph. The decision will be made on parade day.

The Minneapolis-St. Paul metropolitan area could see its biggest November snowfall in nearly a decade, and travel is northwestern Wisconsin “is going to be chaotic,” said National Weather Service meteorologist Brent Hewett.

The Minneapolis airport could be hit by snow but Chicago and its two big airports should only see rain from the storm, weather service officials said.

The second storm developing in the Pacific Ocean was expected to slam the West Coast of the United States on Tuesday evening, bringing snow to the mountains of California and Nevada and wind and rain along the coasts of California and Oregon.

Forecasters also warned of “difficult to impossible travel conditions” across much of northern Arizona later this week as that storm dumps about 2 feet on areas that include Interstate 40. The approaching storm accelerated the annual winter closure of the highway leading to the North Rim of the Grand Canyon by five days.

This month, AAA predicted that the number of travelers over a five-day stretch starting Wednesday will be the second-highest, behind only 2005.

For those flying, the airlines expect traffic to be up about 4 percent from this time last year. Airlines added about 850 flights and 108,000 seats per day on average to handle the increase over last year’s crowds, according to the trade group Airlines for America.

By Colleen Slevin and David Koenig