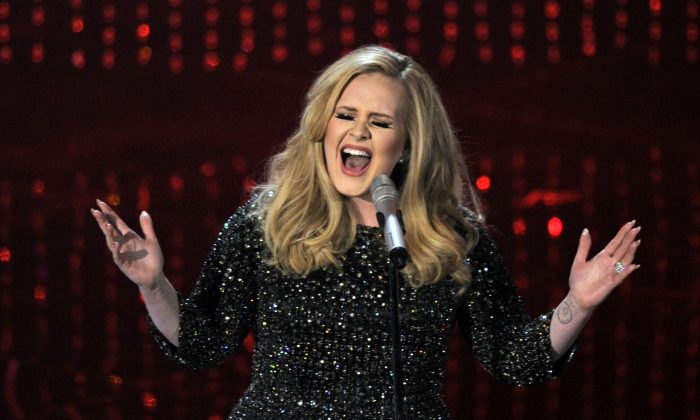 Singer Adele performs during the Oscars at the Dolby Theatre on Sunday Feb. 24, 2013, in Los Angeles. (Photo by Chris Pizzello/Invision/AP)
Entertainment

SNL Suggest Adele’s ’25’ Can Fix All Our Family Problems

The recently released Adele album has everyone talking and listening. Of course the hit single “Hello” which is featured on the album rolled out weeks before, which gave it enough time to become the most played song of 2015 in the first 5 days with over 100 million views, but the love for Adele spans many generations and households.

This love was perfectly captured in the last SNL skip about Thanksgiving dinner where a family would start arguing over race or politics but quickly dive into a rendition of “Hello” as soon as they heard the song played, thus forgetting all about the disputes.

The brilliant cameo by Matthew McConaughey and how all of the comedians in the skit started to resemble Adele perfectly captured the fact that everyone is completely obsessed with the new album, “25.”

McConaughey hosted the night’s show, but fans are saying that it was Adele who stole the limelight by singing “Hello” and “When We Were Young” live.

This was her first TV promotion of the album which was released on Friday, November 20. Since then, fans have flooded social media sites overstating the fact that they would weep and wine all weekend long while listening to the album.

The album sold more than 900K copies on iTunes the first day it was available. It’s also predicted to break the world record in most albums sold in one week with “at least 2.5 million in pure album sales in its first week” according to Billboard.

It seems like SNL is suggesting we all have a copy of Adele’s “25” on hand at our Thanksgiving get-togethers, you know, just in case.